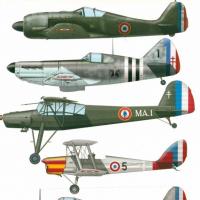 When I first “signed up” to do a review of these decals, I wasn’t familiar with the company, or what would be on the sheet. I was interested in the Ki-43 markings, as I find myself building mostly Japanese aircraft recently. When the package arrived, I was very pleasantly surprised at what I saw!

PT Decals sheet #48002 covers some captured WWII Axis aircraft in French service. The decal sheet itself is very well done with markings for all the aircraft listed below. The decals are all in perfect register, and appear to be of the highest quality on the market today. The lower right of the sheet reads “Pierre Tilley / Dutch Decal 2010; Produced in the EEC”

Included with the decals is a very nice, full color fold out with profiles of each of the aircraft represented on the decal sheet (see the accompanying photos to get a better idea of how great this set of decals really is!)

A write up on the Dutch Decal website reads: “PTdecal is a co-production by DutchDecal and Pierre Tilley. Based on the colour profiles drawn by Pierre Tilley for the French aviation magazine Aéro Journal, PTdecal are produced in three scales 1:72nd, 1:48th and 1:32nd scale (XXLscale)

All sheets are printed by high definition silk screen. PTdecal sheets are published as limited editions for discerning modellers and come with detailed full color instructions.”

The color profiles are quite nice, and give the modeler a little history of each aircraft, the pilot’s name if known and the color schemes used that aircraft. There are deals included with this sheet to model the following aircraft:

There are five (5) different schemes for the Dewoitine D.520 included on this sheet:

Also included are markings for:

I highly recommend this decal sheet to anyone interested in French aircraft, or someone looking for that “something different” to add to your display case. Those who like captured aircraft will also find this sheet a valuable one to add to their collection.

I would think that the only down side to this sheet would be to finding one in the USA. They are available online from various sellers, but I could not find one in North America who had them in stock. If you’re looking for this wonderful sheet my advice would be to get it now – don’t wait! These are limited production sheets, and when they are gone, they will not be reprinted.

Thank you to Dutch Decal for providing the review sample.