Trainers No More: Trojans at War 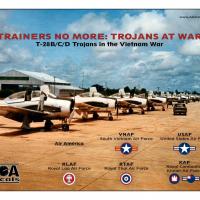 AOA Decals has been releasing some great decal sheets for Vietnam era subjects. Their latest is for the T-28 Trojan. In this particular scale, these decals can be used on either the old Monogram or newer Roden kits.

This particular sheet contains markings for 18 aircraft. Included in an A4 sized ziplock bag are four double-sided 8.5 x11 instructions sheet in full color. The cover photo is quite unique. The marking options include Air America, South Vietnamese Air Force, USAF, Royal Lao Air Force, Royal Thai Air Force and Royal Cambodian/Khmer Air Force. The instructions are very clear and concise. There are all four views of the stencils. Just in case the aircraft had alternate markings they are also shown. Two sets of stencils are included, one the standard and one of alternate markings. The instructions give a generalized summary of the armed T-28 variants so the modeler can figure out what ‘should’ be on the wings. Each aircraft is described with what is known as the armament loadout. The color callout is given in FS numbers.

The aircraft include two USAF, five VNAF, five Laotian, three Thai, one Cambodian, and two Khmer Republic. There is something here for everyone. From the Southeast Asia scheme that could have been flown by the Ravens, to the Zorros with their black and green Trojans, grey over white typical ‘Navy’ and even sharkmouthed South Vietnamese aircraft. Some other things that you don’t normally see is the aircraft flown by the Laotian Air Force with U-shaped framing installed around the fuselage insignia that allowed the national markings to be covered or changed by adding a placard.

The sharkmouths colors are in question. The AOA website discusses this in detail. There are also questions about the color of the lightning bolt color, whether it is red or blue, so AOA provides both and let’s the modeler decide.

If you like small air forces then this sheet is definitely for you. The unique marking options allows you to use any of the Roden kits, T-28B, C or D and add armament to them. AOA does remarkable research, this time aided by Don Logan. The decals themselves are beautifully rendered and since they are printed by Microscale you know they are good. They will also respond well with the Microscale decal setting solutions. This is another impressive decal sheet from AOA Decals.

Thanks to AOA Decals and IPMS/USA for the review copy. You can obtain yours by contacting AOA Decals directly at www.AOAdecals.com . Let them know IPMS/USA sent you.