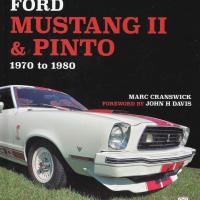 In the early to mid-1960s, the British Invasion forever changed music in America. In the late 1960s, the Japanese Invasion forever changed the cars that roamed the highways and byways in America. The cars were becoming smaller and more fuel-efficient, somewhat easier to maintain and, for the most part, more reliable. Since the 1950s, American automobiles had become larger and more garish in style, focusing primarily on luxury and high performance. Between the increasing insurance premiums and growing gasoline prices, that kind of car was becoming more expensive and more cumbersome to own. During this time, a new kind of American car came into being, the Subcompact. Marc Cranswick, the author, has been a car enthusiast for most of his life and has been involved with numerous car clubs and writing books on the history of a variety of cars. In this volume, he takes us through the formative years of Ford Motor Company’s first line of subcompact cars.

After the foreword, by John H. Davis, the book dives directly into the Mustang II, even though the Pinto was introduced over two years earlier. Just as the original first generation Mustang was based on the compact Falcon chassis, the Mustang II was based on the Pinto. With the Pinto being considered a basic economy vehicle like the Falcon, the Mustang II was more upscale with luxury and performance upgrades because “…Ford wanted an American designed and built car with European qualities”. Following the OPEC oil embargo of 1973, gasoline had become more expensive and in shorter supply, so the smaller and more fuel efficient Mustang II hit the market at more or less the perfect time. Sales of the large 1973 Mustang had been disappointing, but the new 1974 Mustang II model sold around 385,000 units. Originally equipped with either a 2.3L inline four cylinder or a 2.8L V-6, fuel economy increased by 25% over the previous year but performance obviously suffered somewhat (there is the old racer’s adage that “when it comes to horsepower, there is no substitute for cubic inches”). It would be 1975 before the tried-and-true Windsor 302 cubic inch V-8 would return to the Mustang line. A change in the front suspension design had eliminated the shock towers that were utilized in the first generation Mustang, so there would be enough space in the engine compartment for the larger V-8 engine to be installed in the now-smaller car. The Mustang II was available as a base “notchback” coupe or fastback 2+2, with additional options in a Ghia luxury package or the Mach I fastback. While the true enthusiasts moaned and groaned, the sales figures speak for themselves, making the Mustang II a winner in the showroom. In 1976, the Cobra made a return to the Ford stable in the guise of the Cobra II. Interestingly, the optional package did not include a V-8 as the standard engine and over 20,000 first year Cobra IIs were fitted with either a four cylinder or a V-6. In 1978, the last model year for the Mustang II, the King Cobra appeared as the most performance oriented of the line, complete with the very first 5.0 badge on the hood scoop. The book covers all of the basic models, the performance versions, and those that were used in the world of auto racing (including Dyno Don Nicholsen’s ProStock Drag Racing Mustang II). In 1979, the redesigned Fox-platform Mustang was introduced with the “II” removed from the name, and the Mustang II became a part of history.

The latter half of the book is dedicated to the car the Mustang II was based on, the Pinto. The first subcompact car for Ford went from design to production in only 25 months. Lee Iacocca, the President of the company, took a personal interest in the car and pushed its development. Considering the speed of development, and the obvious glitches that were likely to occur, the first offering was restricted to the two door sedan. The Pinto had a wider track than other small cars at 55 inches providing good stability on the road with less wobble in windy conditions. The base engine was the Kent 1.6L four cylinder producing 75 horsepower while the optional engine, the 2.0L EAO four cylinder, was designed specifically for the Pinto. The 2.0 had cast iron block featuring five main bearings for smooth operation and durability, while the cast iron head had a single overhead cam, producing 100 horsepower on regular gasoline. Both were available with either a four speed manual or three speed automatic transmission. The 2.0 brought 0-60 times to 10.5 seconds and could complete a ¼ mile in 17.6 seconds at 76 miles per hour, not too bad for a an economy car with a four cylinder engine!

The 3 door liftback Runabout version arrived in 1971, and the station wagon followed in 1972. All of the Pinto models had successful sale figures, with over 480,000 units being sold in 1972. By 1973, the 1.6L was gone, the 2.0 was standard and the new Lima 2.3 was the optional engine. But the increased Federal standards for emission controls and added weight from heavier front-and-rear crash resistant bumpers had taken their toll on performance. Mercury added the Bobcat in 1975, which was a rebadged version with slightly different trim and luxury features. Back to the subject of performance, the Pinto was introduced during the “Win on Sunday, Sell on Monday” time period, so several big name racers eventually turned to the Pinto. They modified the cars and raced them at NHRA drag racing events as well as IMSA & SCCA (Trans Am) road race events for a number of years.

The Pinto almost didn’t recover from the infamous “exploding fire trap” accusation. In the mid-1970s, the National Highway Traffic Safety Administration was trying to determine a rear end crash safety standard. While the Pinto was criticized for having the gas tank between the rear axle and bumper at the time, most cars produced in America, from subcompact to full size, shared that same design. Ralph Nader got involved in 1977, and NHTSA had to do something. They acquired a full size car, loaded the front with weight and turned on the headlamps to provide a spark. They then plowed this car into the rear of a 1972 Pinto which had a tank full of gasoline…at 35 mph, a full 15 mph higher than the standard test and 5 mph higher than the proposed test speed. Obviously, the gas tank ruptured and caught fire, and a mandatory recall was initiated. Even though any small car would likely have produced the same result, the Pinto took the hit. The model soldiered on until 1980, but it was eventually replaced by the front wheel drive Escort.

(Author’s note: When the Mustang II was introduced in 1974, I had just gotten a used 1966 Mustang coupe, a nice car with a 200 cubic inch six cylinder engine operating through a Ford Cruise-o-Matic transmission. That car carried me through my time in high school and the first two years of college. I then bought a used 1971 Pinto sedan, with the 2.0L and four speed, for the last two years of college. After a couple of trades, I got a 1975 Pinto sedan with the 2.3L which carried me through and beyond graduate school. Also, my Dad drove a 1976 Pinto station wagon on his commute to work for several years during the early 1980s.)

This book was a wonderfully nostalgic look at the automotive experience of the 1970s. The photos are beautifully done, feature good detail and variety, and keep the book visually interesting on every page. The history is well researched and presented in text that reads easily and pleasurably. Although I had a good knowledge of the vehicles, the book filled in the missing information quite nicely. For the average automotive history buff, the book is well written and a great read while Fordophiles will consider it a must-have for their collection. For scale modelers, there is plenty of information in both visual and textual formats to provide excellent reference for building accurate miniature versions of these iconic vehicles for either the contest table or display shelf. I would give the Ford Mustang II & Pinto 1970-1980 my highest recommendation as an outstanding reference and an enjoyable reading experience. I am sincerely grateful to Motorbooks International and Quarto Publishing USA for this copy, and to IPMS for the opportunity to review the book.