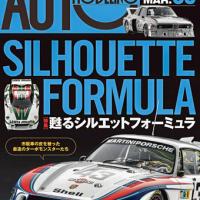 Auto Modeling is a high quality Japanese language magazine from publisher ModelArt. Each edition features models of cars, mostly racecars, from various race series and eras. Many of the previous editions focused on Formula One cars in different time periods.

The magazine has Japanese text, but some of the titles and headings are in English. The photographs are numerous and very high quality.

The featured Tamiya 1/12 Martini Porsche 935/76 from the World Sports Car Championship series is covered in detail over 19 pages. The kit build is covered in many small, but high quality, photos with descriptions in Japanese. There are 10 pages of very detailed diagrams of marking and equipment for different versions of the cars, and the racing record of the car in 1976-77.

Other World Championship Series Tamiya Porsche 935 kits are covered in four to six pages each. Other kits in the series include an ARII 1/24 BMW 3.2 CSL Turbo, a Tamiya 1/24 BMW 320i, a Tamiya 1/24 Lancia Stratos Turbo, and Model Factory Hiro & ESCI versions of a 1/24 Lancia Beta Montecarlo Turbo.

A Special Modeling Section illustrates the build of a fantastically detailed scale model of Ron Haslem’s #4 elf 5 1988. The kit is a 1:12 Model Factory Hiro multi-material kit, and the photos and completed model are stunning.

This is a beautiful magazine with photos of equally beautiful models. The language is a barrier, but the photos are clear enough to get a good understanding of the kits. The quality of the modeling is absolutely top-notch.

Thanks to ModelArt Magazine and IPMS/USA for the chance