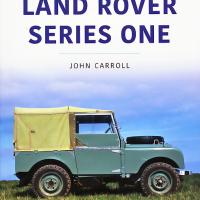 The Land Rover was developed in 1947 as a simple four-wheel drive farm vehicle and was created as a way for the British Rover car company to get back into the vehicle manufacturing business following World War II. It was a huge success, not only as an agricultural tool but as a military vehicle and went on to worldwide success as a top level on- and off-road vehicle. The vehicle evolved quickly in its first ten years from 1948-58 as the Series I and until 1971 as the familiar Series II/IIA that was used ion so many safaris, expeditions and in documentary series through the 1960s. It was so popular that this ‘temporary’ solution became a permanent part of the Rover Company’s range. Owners and drivers soon included royalty, farmers, explorers and soldiers, and the Land Rover became a ubiquitous part of the British landscape, especially in rural areas.

Author John Carroll is an acknowledged expert on the Land Rover, being not only the editor of Classic Land Rover magazine, but an owner and restorer of many Land Rovers himself. Drawing on his expertise, these two books chart the rise and development of the type, from the Series I of 1948 to 58 and the Series II and IIA from 1958 to 1971. A companion volume is available covering the Series III, taking the story to 1985, while there is also a book covering the upscale Range Rover.

The author uses modern photos of these older Land Rovers that have been lovingly cared for and in many cases restored to like-new condition. These photos chart the development of the type through the many variations and include a lot of close-up photos that will be of use to the modeler that owns one of the various available kits.

Not specifically modelling books, these are nonetheless useful for their comprehensive coverage of the type and are to be recommended. My thanks to Key Publishing for the review samples.