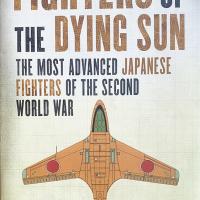 Justo Miranda is the author of books and monographs on aviation since the 1980s. A widely known historian, Miranda specializes in aviation of the 1930s and is the author of two volumes on aircraft used during the Spanish Civil War. The exciting discovery of a microfilm on secret German weapons in the early 1990s drove him to publish Secret Wonder Weapons of the Third Reich, later published by Schiffer in 1996. Since then, Miranda has published Reichdreams and monographs on little known airplane projects.

The first B-29 Superfortress, ironically named ‘Tokyo Rose’, flew over Tokyo on 1 November 1944 and was on a photographic reconnaissance mission.

Nakajima Ki-44 fighters of the 47th Sentai took-off to intercept, but the B-29s flew at such a high altitude and speed that they failed to engage. The Ki-44-II Otsu had been specifically designed for this type of interception and could reach the astonishing rate of climb of 5,000 meters in four minutes; however, it was not good enough.

During the following ten months, a devastating bombing campaign by B-29s decimated sixty-seven Japanese cities and half of Tokyo. The cultural shock and political consequences were huge when it was realized that the heat and stress-metallic alloys for the turbo superchargers could not be manufactured in high numbers.

Japan lacked the essential chromium and molybdenum metals to harden the steel, which thwarted the design of numerous advanced projects such as turbojet and rocket engine technology from Nazi Germany.

This book is interesting to me, in that there are no photographs at all, even of aircraft that existed off of the draftsman’s table. What there are, though, are tons of line drawings which appear to be 1/72 scale (although some appear drawn to size) and extensive text discussing each machine. Additionally, there are drawings to illustrate underwing rocket launch rails, different types of ordinance, and even specifications for mid-air incendiary bombing, a technique employed by desperate Japanese airmen towards the end of the war.

As far as the usefulness of the drawings to the modeler, I will let the reader decide. They can be scanned and enlarged to 1/48 (or whatever size you need). Most machines have top, bottom, and at least one side view, but not all of them do. The technical data included in addition to the histories of each plane is helpful to the reader in understanding what their capabilities were (or, would have been). I also found the chapter “Radar Warfare” fascinating. In all of my years of studying the Second World War, I never knew the Japanese employed radar. I’m embarrassed to admit that, but if you read this book, you’ll learn quite a bit regarding their radar capabilities.

I think it would be great if kits existed of some of the more advanced experimental concepts in this book, particularly the Kawanishi A8K1 Toppu and the Nakajima 20-shi-KO. Both of these machines look like they’d be trouble if they’d made it into production.

Based on the historical text accompanying each aircraft alone, I can recommend this book without reservation. My thanks and gratitude to Fonthill Media and IPMS/USA for the review sample.