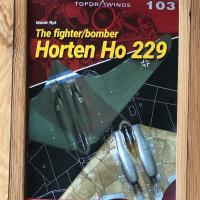 For all fans of the Horten brothers’ all-wing jet of World War 2, Marek Ryś and the folks of Kagero have put out a wonderful book of drawings that will be a must have for rivet and screw counters, and of interest to those who have an affinity for this plane. Consisting of line drawings in 1/72, 1/48, and 1/32 scales, there are also four pages with color plates of the planes as well as two included foldout drawings in 1/48 and 1/32 scale. As a modeler and fan of the Ho 229, I can highly recommend this new offering from Kagero in their Top Drawings line!

I have previously written that I have been a fan of the Horten Ho 229 since I first saw a built up 1/72 scale Pioneer 2 kit in a hobby shop located in Norfolk, Virginia, and immediately purchased one of the kits on their shelf (yes, it is still in my stash). At the time (late 1980’s), I had never heard of this plane, and as the F-117 and B-2 were just being introduced to the country, my interest was thoroughly piqued! With the addition of kits by Revell Germany, Dragon, and more recently Zoukei Mura, a reference like this will surely provide additional inspiration during a build!

For those not familiar with the Horten brothers or their work, Reimer and Walter Horten had a keen interest in flying wing aircraft. Their work began with gliders of differing designs and moved into jet propulsion towards the end of the war. While never reaching full production, copies of the planes built up were captured at the end of the war with three examples ending up in the United States. Some authors have tried to connect the Ho 229 to the B-2, but while the Horten brothers were working in Germany, Jack Northrop had his own flying wing designs developing in the USA.

As I stated up front, this book is a great addition to the libraries of Horten fans and modelers alike! The production quality is top notch, and the foldout drawings could easily be framed and displayed. With no misses that I could identify, I highly recommend this publication!

I always like to wrap up by thanking the person in charge of the Review Corps, so hats off to Phil Peterson for his work, and to the folks behind the scenes like Bill O’Malley, who mails out the lion’s share of the review items, and the folks who place our reviews on the IPMS web site. In closing, a special thanks to the folks at Casemate for providing this book for review.