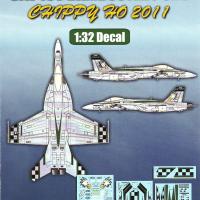 VFA-195 is one of the naval F-18 squadrons people usually don’t remember until either one of two things happens. First, they are called the “Dambusters” after their successful destruction of the Hwacheon Dam in North Korea. Even more recognizable is their “Chippy Ho” scheme of green and black with the large eagles head. They have been carrying some form of this scheme on the CAG aircraft for about 25 years. The squadron was formed many years ago flying Avengers but worked their way up to F-18’s in the 1980’s and to the newer F-18E/F Super Hornet in the 2010. The Dambusters are based at NAF Atsugi, Japan

DXM Decals has issued the latest Chippy Ho markings for the F/A-18E Super Hornet which were for the 2011 markings aboard the USS George Washington. The decals come with a full color two-sided sheet which shows placement of all the decals as well as color call outs in FS numbers, Mr. Color, and Humbrol lines. There are three full sheets of decals plus a smaller fourth sheet with the wing bands on it. Color is superb, as well as registration. The decals are printed by Cartograf. The sheets also include the needed stencils and decals to simulate the mesh on the needed parts of the kit. The decals are designed for the 1/32nd scale Trumpeter kit.

These decals continue a tradition of Chippy Ho markings that I hope doesn’t end. The great news for modelers is that DXM offers these not only in 1/32nd scale reviewed here but also 1/48th and 1/72nd scale also, so you can build your scale of choice.

These will look spectacular on the kit! They are highly recommended and required for those with Chippy Ho collections. My thanks to DXM Decals for the review sample and to IPMS/USA for the opportunity to review it.