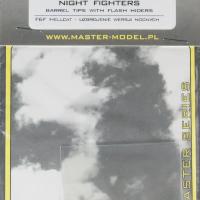 Over the past few years, Master has established itself as a quality provider of turned-metal aftermarket details for ships, armor, and aircraft. Their latest set of new releases cover the F6F Hellcat, providing welcome metal details for three variants in three major scales. The detail set under review today covers the F6F Hellcat Night Fighters’ armament configurations in 1/72 scale.

While most Hellcats were equipped with six .50 cal machine guns mounted three per wing, the night fighters had a second arrangement which included two 20 mm cannons in place of the innermost .50 cals. In addition, the inner guns often featured flash suppressors, a feature not found on the outermost .50 cals as their barrel tips were recessed within the wing inside blast tubes. In 1/72 scale, the guns found on the Hellcat are diminutive and the plastic gun barrels and blast tubes included in most kits are featureless rods, at best. Careful drilling may allow the tips to be drilled out, but this will still fail to capture the actual complexity of the barrels.

Master’s Hellcat night fighter set covers both of the armament styles, found on the F6F-3N and F6F-5N. To this end, the set includes eight turned-brass parts representing the six .50 cal machine guns and two 20 mm cannons, and a small instruction sheet. The barrel of the outermost guns are not visible, so Master provides a drilled-out brass rod to represent the blast tube they are mounted in. The middle-mounted .50 cal guns are equipped with flash suppressors. The innermost gun can be represented by another pair of .50 cal barrels with flash suppressors, or a pair of 20 mm cannons, also tipped with flash suppressors. The 20 mm cannon barrels are not created with the cannon’s wing faring, so you’ll need to use the kit’s faring in conjunction with the metal barrel. The turned profile on each barrel is extremely well done, and the drilled-out flash suppressors are truly a thing of beauty! The suppressor walls are surprisingly thin and sharply rendered.

The set’s instructions include two photos of Hellcats, one with each armament configuration, two diagrams to help ensure proper placement of the various barrel lengths for each setup, and metric measurements to aid in mounting the barrels. The instructions mention that most Hellcat night fighters used the six .50 cal arrangement, while some F6F-5Ns carried the 20 mm cannon, so you’ll want to check your references to ensure you equip your build appropriately.

I compared Master’s set to the gun barrels found in Eduard’s 1/72 scale F6F-5N kit. Eduard provides the three .50 cal plastic barrels for each wing attached to a single mounting plug, which fits securely between the wing halves. For F6F-5Ns with the 20 mm cannon, Eduard provides a 20 mm barrel, with suppressor, mounted to the needed wing fairing, which is simply placed over the innermost gun barrel’s hole. Interestingly, Eduard does not seem to include flash suppressors for the .50 cal guns, making Master’s set a desirable upgrade for those building early night fighters.

Mounting the Master .50 cal replacements on Eduard’s kit should be as easy as cutting off the mounting plug’s plastic barrels and drilling holes for the Master barrels. Similarly, the 20 mm plastic cannon barrel can be clipped off of its fairing, and a mounting hole drilled in its place. Thanks to the mounting plug providing a solid backing for the .50 cal barrels, I would plan on test fitting the Master parts without glue after drilling the holes and only affixing them permanently during the Hellcat’s final assembly, after the model was painted. Other kits may require the barrels to be mounted earlier, simply to avoid losing the small parts inside a completed wing!

As is typical with all of the Master products I’ve used and reviewed, this F6F Hellcat Night Fighters armament set is a beautiful bit of manufacturing. The parts are simple and straightforward to use while also providing an amazing level of detail. I’d highly recommend the set for anyone building a Hellcat night fighter in 1/72 scale. The detail is beyond what one can create, even with a steady hand, and it’s the small details that help any build stand out!

My thanks to Master Model for providing these detail parts for review and my thanks to the IPMS Reviewers’ Corps for the chance to review the set.