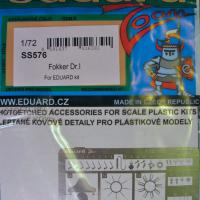 If you are looking to dress up your 1/72 scale Eduard Fokker Dr. 1, a new Zoom set has been released that makes short work of this task. Consisting of a single fret with some items pre-painted, the 32 items provided will dress up the cockpit, guns, engine, and control surfaces. Modelers with some experience using small photo-etch parts should find it easy to add this set to their plane.

I was afforded the opportunity to review this PE set when I picked the recently released Weekend Edition of the Fokker Dr. 1 (kit 7438) for assessment. During the build, I used the following items:

I had intended to use the step (part 9), but lost it when removing it from the fret, and could not seem to locate it again. I decided early on to use Uschi and EZ Line products for rigging and control wires, so I did not use the guide horns and cables (part 1), nor did I use the horns for the rudder (part 7). I somehow managed to break the cockpit frame (part 18) at the bending points on one side, but this actually made it easier to build the cockpit as halves and then join them together. I did use Humbrol Copper, Model Master Acryl Aircraft Interior Black, and Model Master Metalizer Gun Metal paints on the applicable items.

As far as my hits are concerned, I found that all of the items were relatively easy to add and that they did make a big difference with the appearance of the finished product. Although it is difficult to see into the cockpit, what is there looks great. The seatbelts and harness are pre-painted (as were the instruments on the interior frame and compass), which speeds things up nicely, and the engine and gun details are great improvements for the kit parts.

I did not have any misses identified with this set, but I did find that with the charging handles installed on the right side gun that I needed to remove some of the kit plastic on the installation area to get the gun to fit.

In conclusion, I would highly recommend this set to anyone wanting to add some detail to his or her 1/72 scale Fokker Dr. 1. If you have some experience with using small photo-etched parts, you should not be challenged by this set.

I would like to thank the folks at Eduard for graciously providing this Zoom set to the IPMS-USA for review and to Dave Morrissette for allowing me to receive this set. I would also send kudos out to the assistants in the Review Corps for the great job they do in keeping the Corps running strong and as always, my appreciation to anyone who takes the time to read my comments.​