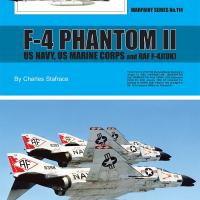 This is another excellent addition to the War Paint Series written by Charles Stafrace, a well-known and repeat contributor to the War Paint series. Theillustrations by Richard J. Caruana support the text and story line, and in and of themselves, are an excellent collection of Aviation Art. This book covers the development, deployment, service, and retirement of one of the most well-known aircraft, especially for those who came to maturity during the Vietnam conflict. The historian will find that the book covers the development and service of the Phantom II in detail, and the modeler will find the book to be an excellent source of information, detailing the aircraft with photographs and outstanding artwork.

As a modeler, I found this book to be rich in detail with a thorough coverage of the markings that are very helpful. The photographs, especially those in the “Walk-Around” section of the book, provide a great source for “detail”, as well as colors and weathering, if one is into weathering models. In short, this book is a gold mine for the modeler.

As someone who is interested in the history of certain aircraft, the Phantom II being one of those aircraft, the information provided about the Phantom II and its service for both the Blue Angels and the Thunderbirds is fascinating. I remember attending air shows at which I saw both Aero-Teams at one time or another. I have several Phantom kits and this publication is just the motivation I need to select a Phantom II as my next project.

This book is highly recommended because of the excellent writing style of the author,the impressive illustrations, scale plans, and images,the thorough coverage of the Phantom II,and the six pages included as an aid to those who model. Thanks to Guideline Publications for providing this book for review by IPMS/USA.