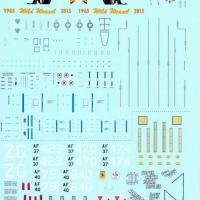 Developed in the 1970’s and first fielded in the early 1980’s as the US Air Force’s lightweight multi-role fighter-bomber to replace the F-4 Phantom and A-7D Corsair II, the F-16 Fighting Falcon established itself as one of the most capable, reliable, and cost-effective aircraft in US Air Force history. One of the specialized roles the F-16C inherited from the F-4 was that of Suppression of Enemy Air Defenses (SEAD) - in Air Force parlance known as “Wild Weasel.” F-16C Block 50 and 52 aircraft equipped as Wild Weasels began production in 1991, and still serve as USAF’s primary SEAD platform. Since the inception of the Weasel mission in 1965, the unofficial motto of Weasel crews has been “You Gotta Be S(poofin’) Me” (the polite version), or just “YGBSM.”

Commemorating the 50th Anniversary of the Wild Weasel mission, this sheet features decals for a Block 50 F-16C from the 20th Fighter Wing at Shaw AFB, SC, sporting a cartoon of an overgrown and clearly wild rodent prepared to hurl a lightning bolt at an unwary foe. Also, as a great bonus surprise, are markings for a Weasel F-4C, with a choice from among 5 tail numbers, from the 18th Tactical Fighter Wing, circa 1972.

Quality of print (by Microscale) is superb, with vibrant colors and ultra-fine detail discernible in the smallest of stencil data.

Piggybacking on another review item, my 10 year-old son, Camden, applied the decals to Academy’s USAF F-16C Multi-role Fighter kit, and was extremely excited to add this colorful Viper to his growing collection.

From a technical standpoint, the decals applied and settled in using the Microscale System brilliantly. The thin film was easily blended with the sealing clear coat. The only point of question was around how to allocate the thin neutral gray lines denoting walkways on the wings and fuselage. Placement of the lines for the wings was pretty self-evident, but the fuselage lines required a bit more research from other F-16 kits and online photos. We ended up carving up a couple of the remaining line sections to get them to fit convincingly.

From an accuracy standpoint, the markings bore strong fidelity to online photos of the actual jet, with the exception of the tail numbers, which were printed on the sheet in neutral gray (FS36270) rather than in gunship gray (FS36118), rendering them nearly invisible on the vertical stabilizer.

Despite a couple glitches in instructions and tail number color, the overall effect is absolutely stunning. We highly recommend this sheet for modelers wanting to model a colorful F-16C Weasel or add to their 1/72 scale YGBSM collections.

Thanks to Two Bobs Aviation Graphics for the review sample and to IPMS/USA for the opportunity to present this review.

Layout of decals for Phantom aircraft

Layout of decals for Viper aircraft

Left-side, above view of Viper aircraft