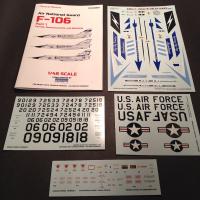 The F-106 served active duty Air Force squadrons from 1959 to 1981. As the aircraft were replaced with the new F-15A, those Darts were relegated to six Air National Guard, Fighter Interceptor Squadrons (FIS). Those squadrons used the F-106 until their final retirement in 1988. Three of those units are the subjects of this release from Caracal Models. The zip lock bag contains four sheets of decals that include every marking needed to finish your F-106 with the exception of the weapon stencils and instrument panels. For that you’ll need to use the kit decals.

You get decals for a single seat and a two-seat version from each of the following units.

The Trumpeter 1/48 Delta Dart is the single seat version so I chose the set for AC 57-2478 with the Montana ANG mainly for the cool tail graphics. On the sheet these look outstanding. They are printed in perfect register and a marked improvement over the kit decals particularly in the nation insignia coloring which is a much truer blue to my eye. The tail graphics for the Florida ANG version are black as opposed to the Trumpeter sheet that has them in blue. My research says Caracal got that right. The real test of course is getting them on the model. In a word, fantastic! They come off the sheet very quickly and are easily positioned. They settled down both with and without setting solution. I was concerned I’d have a problem with silvering because I didn’t gloss coat as much as I should have, but it wasn’t an issue at all.

Caracal includes enough number stencils so you could do just about any aircraft in these units. What else is there to say? Aftermarket decals should offer versions the kit doesn’t and improve on the quality. You get that here in abundance. So if you haven’t figured it out by now, these decals are 10 for 10 in my opinion. Beyond highly recommended. Thanks so much to Caracal Models for the sample of this great product and to IPMS for letting me add it to the Trumpeter kit they also provided for my review.