F-16C/D Vipers – The Next Generation 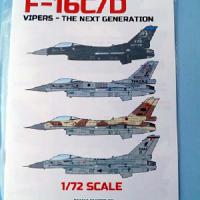 I love small air forces and I love the F-16 (and not just because they are based at Hill AFB just up the street) so a decal sheet that combines both is always high on my list.

This new sheet by Caracal delivers. 5 of the 6 schemes are small air forces with the other scheme a Minnesota Air National Guard version in a new camo. The decals are printed by Cartograf who have a solid reputation and feature the following markings:

The decals are designed for the Hasagawa and new Tamiya kits. I have one of the new Tamiya kits in the stash so used it to check some fit items. Most of the markings have plenty of room but the tail stripes for the ANG and Bharaini planes need an exact fit and they both look spot on to the Tamiya kit. The other tail marking that would need to fit is the Polish Tiger Meet markings and once again, they look perfect to me.

OK, I know you all say F-16s are boring because they are all grey. Well, all 6 schemes are different and while there is a predominance of greys, they will certainly look different on the shelves or contest tables. The Minnesota ANG kit is in the “Have Glass” color which is the same seen on the F-35s. The Polish plane is in a dual grey camo pattern that looks sharp, especially with the tiger on the tail. The Royal Morrocan version is in a sand and tan camo top with grey undersides. The Bahraini and Omani versions are in single grey colors but different ones and the Iraqi plane has a dark grey camo pattern over the standard grey. This last plane is based on pics of the first plane for Iraq, a D model serial 1601 which is also included in the kit.

Caracal also gives a list of FS colors to match and a link to a page of reference photos on their site, a nice touch. Stencils are also included.

Overall this is a very nice sheet which I hope to build most if not all of the schemes (something that doesn’t happen with many of the new sheets being released today). Now, just got to find some pylons and tanks to hang off the Tamiya kit.

Thanks to Caracal Modesl and IPMS/USA for the review kit.