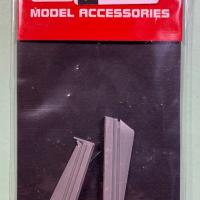 This set provides replacements for the ventral fins for the F-14 Tomcat in 1/72 scale. As the ventral fins remained the same throughout the Tomcat’s production run, they can be used on the F-14A, the F-14A+/B and the F-14D. The set is generic in that it is not designed to be used just on one particular manufacturer’s kit.

To simplify production and especially maintenance and supply requirements, the left and right ventral fins on the F-14 Tomcat were identical, so the same part could be used on either side. Taking advantage of this fact, Brengun/Hauler’s set provides two identical castings of the ventral fin. Rather than make different versions of the ventral fin to fit different model kits, Brengun/Hauler elected to mimic Grumman’s decision and the set includes two identical parts.

As expected from this manufacturer, the castings are crisp with just a little flash around the trailing edge of the fin. The fins are easily separated from the casting block with a fine razor saw and clean-up of the cut edge is easily accomplished.

After separating the parts from the casting stubs, I soaked the fins in clean, soapy water to remove any casting residue or oil from the parts and then set them aside to dry. As a Tomcat addict, I always seem to have at least one F-14 kit under construction. This time it was an F-14B kit from Hasegawa. As Brengun’s parts are intended to be applicable to several different kits, the fins do not have any locating tabs or pins on them to assist in locating on the model. I used one of the Hasegawa fins to establish where the leading edge of the ventral fin was and marked that location in pencil. I then tacked the Brengun fin in place with white glue, taking care to ensure that the part covered the locating slot on the kit and that the fin was at the correct angle. Once the glue set up, I took a look at the fit and realized that I will either need to do some filing of the replacement part or filling around the base of the fin after it has been glued in place with superglue, as the mating surface of the fin is flat and straight, whereas the lower engine nacelle of the Tomcat has a slight curve upward as you go aft. The gap is not huge, so a little Mr. Surfacer should be all you need to fair the fin in.

As I also have F-14 kits from Fine Molds and Great Wall Hobby in my stash, I pulled out one of each of those kits to see how the replacement parts fit. Both of these kits have a slot that the ventral fin slides into rather than locating tabs or pins. In evaluating the fit on both kits, the Brengun parts are just a little wider than the slots, so the lower edges will need to be sanded slightly to slim them up so that they will slide into the slots.

This set provides a nice set of replacement fins, and I am looking forward to using this set on one of these kits. Recommended.

Thank you to Brengun-Hauler for the review sample and IPMS-USA for letting me review it.