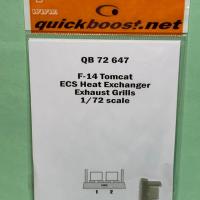 This set is designed to be used on Hasegawa F-14 Tomcat kits. The set consists of 2 resin ramps, replacing the kit’s molded on ramps. The title states that the parts are the ECS (environmental control system) exhaust grills, however, in reality they are the fixed bleed doors which allow excess air to be vented out of the intakes, especially at higher airspeeds when the movable ramps deploy to restrict the airflow down the intakes and keep the air subsonic when it hits the front of the engines.

The parts are exceptionally thin and crisply cast. However, as the bleed doors are molded as part of the upper fuselage on the kit, I used a fine razor saw to remove the kit doors. My regular razor saw was too big to get between the Tomcat’s fuselage and the bleed doors, I opted for a very thin pointed saw blade that fits into my normal Xacto handle. The doors were easy to remove, however, I ended up having to do a fair amount of clean up once they were removed as the saw and the Xacto handle scratched up the upper surface of the kit during the removal operation. In addition, I had to do a little filling with putty to level things out where the saw removed more plastic than intended.

Before installing the replacement doors, I also evened up the holes in the top of the fuselage where the air exits the intake trunks. I recommend the removal surgery be completed before you join the upper and lower fuselage halves to make handling easier. I installed the bleed doors for illustration purposes, but I recommend that you hold off on installing the doors until right before painting to avoid damaging them during the rest of construction.

As expected from Aires/Quickboost the bleed doors are very well molded and thin and could be a nice upgrade to your Hasegawa Tomcat. I do like the look of the new doors, but I do not know if it was worth all the extra work to install them.

Thank you to Aires for the review set and to IPMS-USA for letting me review it.