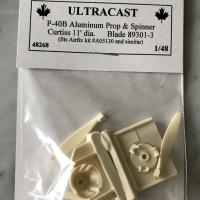 Recently I was given the opportunity by IPMS USA to review Ultracast P-40B Aluminum Prop & Spinner Curtiss 11' dia, Blade 89301-3 for the Airfix P-40B Warhawk kits. One of the first things to notice with this product is the nice presentation of the packaging with the Ziploc seal to allow for easy access to parts.

The molding on the resin prop and spinner is exquisite and very easy to remove from resin block and are a direct replacement for the ones that come in the kit. You will notice the differences between the kits supplied prop and the Ultracast blades is that they are wider and the profile is different than the steel blades, you will also notice a different opening shape where the blade goes into the spinner, the steel blades had more of a round opening. If you are wanting to build an A.V.G. Flying Tigers P-40B this product is for you beings that most of those had this type of blade. Once again the fit and level of detail is superb.

Overall I’m well pleased with what I have seen from Ultracast in their offerings so far for the Airfix P-40B. This aluminum prop and spinner will definitely make your Warhawk more presentable and realistic when the build is finished. I would like to thank Ultracast and IPMSUSA for the opportunity to review this item.