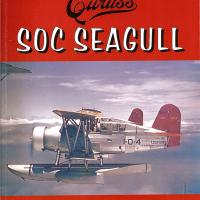 The Curtiss SOC Seagull was one of the classic biplanes of World War II. The early models entered service as the Navy’s ship- and shore-based scouting-observation airplane in 1935, replacing the Vought O3U Corsair biplanes during the late thirties. Although the prototype SOC, designated XO3C-1, was an amphibian, all subsequent models were either floatplanes or landplanes, and the type was used everywhere the Navy operated before and during the war. A total of slightly over 300 were built, including Curtiss-built SOCs and Navy-built SONs. The book outlines the history of the type’s design and service, even to the point of identifying its competitors and why they failed to make the grade. Another significant fact is that the author explains some of the aerodynamic qualities of the wing which had slots and flaps, improving slow flying characteristics. The SOC went through four major production models, SOC-1 through SOC-4, and the author explains and illustrates the major differences of each.

Very detailed coverage is given on the subject of color schemes, unit assignments, and squadron and unit markings. Given the small number produced, that probably explains the fact that no SOC/SON aircraft were sold surplus to civilians at the end of the war, as it might have made a pretty good dusting and spraying airplane. At least Bill Larkins’ excellent work, Surplus WW.II U.S. Aircraft, does not mention the type. I can’t find any references to any surviving SOCs.

Consisting of 128 pages plus covers, the book is packed with as much information as is possible to cram into a book this size. Three vintage color photos grace the front and back covers, rare examples of color photography dating back to 1941. There are no color profiles as such, but the quality of the photos is such that any modeler could build a model of one of the many versions of this airplane based on the black and white photos alone. Although some of the photos are “U.S. Navy Official,” many are ones taken by some of those dedicated 616 airplane photographers of the nineteen thirties, including William T. Larkins, Bill Swisher, J.C. Mitchell, Peter Bowers, and others. These men hung around the civilian airports before the war and photographed anything with wings that they saw, and the results are some fascinating photos of these classic biplanes. Once the war started, however, paranoid security took hold, and most wartime photos of these aircraft were taken by official photographers. However, some of the photos they took are nothing short of spectacular, including shots of the floatplanes on catapults on board warships, pictures of takeoffs and landings, and views of the planes undergoing maintenance and repair.

One very useful feature of the book is the number of interior and detail views provided. There is certainly enough information here for any serious modeler to build a highly detailed scale model of the SOC. Also, there is a section at the end where the author discusses the two plastic models that have been issued of this aircraft – Hasegawa’s 1/72 scale version, and the 1/48 scale Vac Wings kit. He even printed a copy of the 1/72 scale recognition model templates for identification models that were built by high school students during the war. Three-view drawings in 1/72 and 1/48 are included, along with a lot of diagrams of such things as instrument panels, rigging diagrams, landing gear details, etc., some obviously being taken from maintenance manuals.

It is difficult for me to say anything negative about this book. The author, or perhaps some photographer, goofed one time, as the photo on P. 115 showing a sailor sitting on the float of a light cruiser is printed backwards, unless this particular plane was powered by a British engine with opposite rotation. (If you’ve ever hand-propped an airplane, you’ll spot this immediately.) But overall, this book will probably become the definitive reference work on this classic biplane. The book is definitely worth getting, even if you have all of the other references on the type. Don’t miss out on this one. Highly recommended.

Thanks to Steve Ginter of Ginter Books for the review copy and to IPMS/USA for the opportunity.