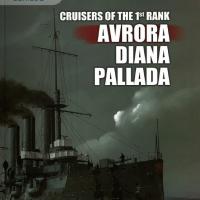 This is Mushroom Model Publications’ sixth book in their Maritime series. It is a translation of the same title in Russian published in 2012 (ISBN 978-5-904180-57-7) and is a monograph dedicated to the service of three Imperial Russian 415’ Protected Cruisers: “Aurora, Diana” and Pallada”. All three participated in the Russo-Japanese War of 1904-1905 and the Aurora and Diana participated in World War I in the Baltic Sea. The Aurora participated in the Siege of Leningrad, one of the bloodiest battles in World War II. A video trailer of the book can be seen on YouTube at https://youtu.be/RJukrtoauDos. Four A3 folded up plans, printed on both sides, detailing the side and top views are included from the (Russian) State Naval Archives collection. I counted 224 black and white photos and 88 drawings or sets of drawings (not counting the four sheets of folded drawings). Additionally, there are six specification tables to compare other nation’s ships against and three maps.

The Diana class cruisers surpassed anything previously constructed in Russia and represented the Russian’s shipbuilding industry’s first stab at a modern cruiser. Still, the Russian shipbuilding industry was not quite up to world standards. The Diana class cruisers did not pass on any of the three tasks they were assigned to. Designed to a maximum speed of 20 knots, all three were closer to 19 knots, some 4 knots slower than their competition. This lower speed made them unsuitable for military reconnaissance. The second task, actions on enemy communications, was compromised by their sailing qualities and moderate cruising range. All three ships were planned to displace 6,731 tons. The Pallada displaced 6,722 tons on acceptance, the Diana displaced 6,657 tons on acceptance, and the Aurora displaced 6,897 tons on acceptance. Their third task was to support battleships in the line of battle. These tasks were compromised by their weak and unprotected armament. These three issues would bite the Russian fleet hard in the Russo-Japanese war.

Aleksiey V. Skvorcov provides great insight into the problems, both technical and political, in the construction and launching of all three ships and their subsequent acceptance trials. The next sixty-one pages are devoted to a rather detailed analysis of the ship’s structure, engines, weapons, and other equipment liberally supported with drawings and photos. The rest of the book describes the service and development of all three vessels.

Pallada, along with Diana, sailed from Kronstadt in October 1902 to join the First Pacific Squadron at Port Arthur. Their first mission was fraught with excessive coal consumption and equipment breakdowns, slowing the other ships in the detachment. The Aurora didn’t fare much better as she left Kronstadt on September 25, 1903 to reinforce the Pacific Fleet.

Both the Pallada and Diana participated in the War with Japan as they played Russian roulette with the Japanese destroyers, described in great detail by Aleksiey V. Skvorcov. The Pallada was eventually hit by a torpedo and limped back to Port Arthur where she remained until captured by the Japanese. The Japanese repaired her and she served as a Japanese training ship and mine layer for ten years as the Tsugaru. The ex-Pallada was finally sunk by Japanese aircraft on the 19th anniversary of the Battle of Tsushima as a celebration of victory.

The Diana suffered damage during the Battle of the Yellow Sea on July 28, 1904, when a shell hit the starboard quarter underwater. The Diana managed temporary repairs and made it to Saigon for more substantial repairs but did not leave Saigon till after the Russia – Japan peace treaty of 1905. Diana eventually returned to the Baltic where she faced a long series of repairs and design changes amidst artillery training detachments. Diana saw action in WWI in the Battle of the Gulf of Riga before joining the February Revolution. Diana served as a hospital ship and moved from Helsinki to Kronstadt where she was moored and disarmed. Diana’s end came in 1922 where she was towed to Germany and scrapped.

Aurora, like her sister ships, suffered equipment breakdowns. The outbreak of the War with Japan saw her detached and sent back to the Baltic where she was refitted. Sent back to the Far East, Aurora suffered from friendly fire, known as the Dogger Bank incident. Aurora finally saw some real action in 1905 in the Battle of Tushima where she lost her captain. Along with two other cruisers, she headed to Manila, then neutral, where she was held by the US until the end of the war. Returning to the Baltic, Aurora became a training ship until the outbreak of WWI. When the February Revolution broke out, Aurora was in St. Petersberg. Aurora fired the first shot on the Winter Palace to start the October Revolution. Aurora returned to the Baltic as a training ship till the outbreak of WWII. Docked at Oranienbaum, Aurora’s guns were removed for the defense of Leningrad (St. Petersberg). Aurora served well as a target until she was finally sunk in late 1941 in her harbor. Aurora was subsequently raised to become a monument in St. Petersberg where she remains today as a museum ship.

I was extremely impressed with the coverage and quality of this monograph. The drawings and photos support the entire timeline of the ships from ideation to present. Although there are a few minor typos, I was impressed with the job the translators did of the original text.

All three ships have been released in 1/700 by Combrig.

My thanks to Mushroom Model Publications and IPMS/USA for the chance to review this great book.