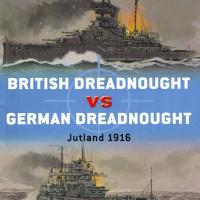 Osprey Publishing’s latest monograph (Book # 31 in their Duel series) focuses on the largest World War I battleships, the Dreadnoughts, and the epic 1916 clash between the Royal Navy's Grand Fleet and the Kaiser's High Seas Fleet. Author Stille (CDR USN ret.), makes the technical material understandable to the layman, and is ably assisted by the illustrators, whose drawings and maps clarify the ships’ layouts and the battle tactics. I read the chapters in order, and found them well organized, with the climactic Battle of Jutland saved for last. The reader, depending on his previous knowledge of the subject, may choose any particular chapter of interest. The book is an excellent starting point for naval history buffs, war gamers and ship modelers. I selected the book to learn more about World War I naval history, and for info on building a dreadnought ship model in the future. It fulfilled both these goals, first with the chapters on naval strategy, the commanders’ backgrounds, and most of all, the Battle of Jutland chapter. Secondly, a ship modeler can utilize the sections on ship design and the specifications of the Royal Navy and German Navy dreadnought classes, then go to the internet and research the kit offerings as I did (many resin kits). The eighty page book is organized into eight distinct chapters, an aftermath, further reading and index.

An enjoyable and educational read, highly recommended. Thanks to Osprey Publishing for the review copy, and thanks to IPMS USA for the opportunity to read and review this book.