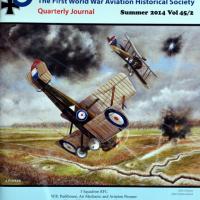 Cross & Cockade International is the quarterly publication of a non-profit UK based organization known as The First World War Aviation Historical Society. This organization has been publishing these journals since 1970 with the objective of furthering the study of First World War Aviation History. The second journal of 2014; Volume 45/2 (Summer 2014) continues the organization’s mission by providing a wealth of information on varied WWI aviation subjects. The cover of this journal features a painting by Allan Forbes of a pair of 64 Squadron de Havilland DH5s attacking ground targets. It serves as a precursor to an interesting eight-page feature article about the 64 Squadron and the DH5s they flew.

The first article of this Journal seems particularly appropriate for the first year of the Centenary of the Great War as it describes the 5 Squadron’s history beginning before the war, preparations for war and its first seven months of operations after the conflict began. The nine well-researched articles that follow add more insight into the story of military aviation during the conflict…from both sides, Allied and Axis. The articles are illustrated by 166 period photographs, three color illustrations and many technical drawings and maps. Included in the BOOKSHELF on the last pages are eleven reviews of recently published works on the subject of WWI aviation. As with all recent Journals, V. 45/2 features color images on the inside and outside back covers. This time it is ten aircraft profiles of subjects that are covered in this journal…an Avro 504, Sopwith Pup, Fokker D.VII, Sopwith Camel, DH9, Salmson 2A2, DH6 and a pair of RE8s.

Another foldout insert included in this journal provides a further selection of A2 Ordnance Survey maps, of WW1 vintage, marked up with the location of all sites of WW1 aviation interest. This foldout includes sheets 7 & 8 in the series. When complete, this series of high quality maps will cover the whole of the UK and Ireland.

This publication is highly recommended to those with a serious interest in WWI aviation or anyone who would like to become serious about the subject. Four of these Journals make up an entire Volume and each volume provides comprehensive information on myriad WWI aviation subjects.

My thanks to The First World War Aviation Historical Society for providing the publication sample and to IPMS/USA for the opportunity to review it.