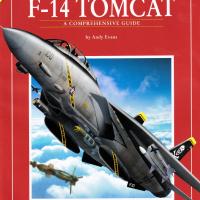 I will tell you from the start that I love SAM Publications books. As a modeler, I am always on the lookout for books that have not only great information and pictures but modeling references too. What I’ll attempt to do is cover all the reasons in this review. This book covers the magnificent F-14 Tomcat in all its glory.

The first place I want to start is the table of contents. That is presented below:

As you can see, there is a lot of focus on modeling with things like the Kitography, drawings and a modeling section. Looking at the book, it is 192 pages of glossy print with hundreds of beautiful pictures, diagrams and drawings covering the Tomcat from development, life and details or its fighting history as well as a modeling section. This is a revised version as it was released earlier BUT this has updated reviews of the latest kits and information not in the previous version.

Let’s take a look at a couple sections to give you a flavor of the book. In the section Tomcats for Iran, there is excellent detail on the USA export of the 80 F-14A Tomcat to Iran in the 1976. Details are included on the training, serial numbers, and the 284 Phoenix missiles also shipped. This is also covered with excellent pictures showing the markings of the Tomcats. This section also details the fall of the Shah and the subsequent Islamic rise. There is great detail on the subsequent embargoes of parts, the Iranians efforts to keep their fleet flying and further details of these flying into at least 2015.

The Chapter Tomcats at War covers the Tomcats which were deployed in war time. This section starts with the Tomcats debut during Operation Frequent Wind which was the evacuation of American citizens from Saigon in April of 1973. There were many other Tomcat support missions from Lebanon to Syria. One of the most famous was the breaking of Libya’s “Line of Death” and the downing of four Libyan jets is covered including the missed missile shots, eventual hits and they enemy pilot ejection. There are multiple pictures of the markings, pilots and airframes used in this fight. The rest of the paragraph covers other actions and one I did not know about was that F-14’s intercepted the Achille Lauro terrorists and forced them down in Italy for capture. Lastly, the war in the gulf is covered in pictures and words. The pictures are crisp and colorful and detail the Tomcat in all its glory.

Lastly, let’s take a look at the section, “Modeling the Tomcat”. There are eight reviews covering different scales, detail levels and markings. A quick summary is below:

These are all fabulous build highlighting great painting methods and other tidbits to help modelers.

I could go into further detail but you can see the gist of the book. It covers detail, operations, markings and modeling. It’s updated with Tamiya builds. The pictures are great. If you have any passing interest in the Tomcat- as an historian or modeler or super detailer, this book, is in my mind, required.

This gets my highest recommendation- it is truly fabulous. My thanks to SAM for the opportunity to build it and to IPMS/USa for the change to read it.

Photos from the Book