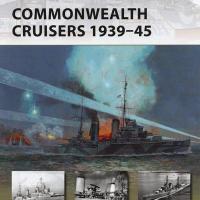 From the very beginning of the Second World War, Great Britain was aided in her naval war against the Axis Powers by officers and sailors of her former colonies, or Dominions, as they were formally known. In this Osprey New Vanguard edition, naval historian Angus Konstam begins by describing the somewhat complicated arrangement of how Britain’s former possessions were differentiated as colonies, protectorates and Dominions. Dominions, known as Commonwealth Nations after 1926, were described as “autonomous communities within the British Empire”, and were to varying degrees, responsible for their own defense, yet were expected to contribute to the overall defense of the empire as a whole.

Prior to the First World War, the governments of Canada, Australia and New Zealand authorized the establishment of naval forces, ranging from small coastal defense vessels to warships as large as battle cruisers. The Royal Canadian and Royal Australian Navies were officially established in 1911. The New Zealand Naval Forces was established in 1913, to become the New Zealand Division of the Royal Navy in 1926, and finally the Royal New Zealand Navy in 1941. Manning vessels built almost exclusively in Great Britain, each was, by World War I, fully integrated with the Royal Navy. In the inter-war years, following a period of fiscal austerity and downsizing, each naval force was strengthened, and by World War II, the Australian, Canadian and New Zealand navies became the only Commonwealth naval forces to operate vessels as large as cruisers.

All the cruisers of the Commonwealth navies were of British origin, and were of the same classes as those operated by the British Navy. The author’s narrative describes in detail how these ships were outfitted, manned and operated during the war. Prior to the Japanese attack in late 1941, Australian and New Zealand cruisers operated with the Royal Navy in the South Atlantic and the Mediterranean. The Canadians operated smaller escort vessels in the North Atlantic. It wasn’t until 1944 that the Canadians acquired HMS Uganda from the Royal Navy, and HMCS Uganda went on to serve in the Pacific with the British Pacific Fleet. By that time, Australian and New Zealand cruisers had been serving in the Pacific (mostly under U.S. Navy command) for some time, and their sacrifices had been noteworthy. In 1941, light cruiser Sidney went down with all hands following an epic battle, sinking the German raider Kormoran off Western Australia, and heavy cruiser Canberra went down along side three U.S. cruisers off Savo Island in 1942.

Aside from shedding some much needed light on an often neglected facet of the Second World War at sea, the best part of this volume are the numerous color profiles (too bad they only show one side of the unique camouflage patterns), the cut-away diagram and beautiful action paintings, and the numerous tables that list all important aspects of each of the Commonwealth cruisers, including the ship’s technical specifications, its wartime modifications and its wartime service and fate. The only down side is that the very few of the photos show close ups or details of the ship’s equipment or layout.

This is another of those short, 48 page “mini-encyclopedias” that’s packed full of useful information. Highly recommended. Thanks to Osprey Publishing for providing this review sample.