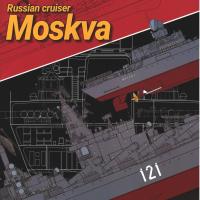 Kagero Publications, a publishing house in Poland, has continued their series of top drawings of military equipment. This edition, number 129, covers the Russian cruiser, Moskva. In the spring of 2022, the Moskva made the news. The ship was a casualty in the recent war between the Russia and the Ukraine. The ship was hit by two anti-ship missiles and was sunk, though the Russians denied it. The top drawing series provides two double sides sheets with color profiles and drawings of the ship in 1989 and 1998. The book provides a series of black and white drawings of various parts of the ship. The modeling plans and drawings are crystal clear. Captions and text are in English and Polish.

Originally the Slava, the ship was launched and commissioned in the waning decade of the Cold War. The class of cruisers was armed with anti-ship missiles whose sole purpose was to sink western aircraft carriers. She served for a good part of her career in the Black Sea, which is where she sank. The drawings do not include a profile from 2022, so a modeler will have to be satisfied with what is in the pages of the book. It does not delve into every system and subsystem on the ship, but this should be more than adequate.

Anyone who is interested in Soviet Cruisers, and, in particular, wanted more details for their models, this book provides enough material to super detail your own ship. My thanks to IPMS, Casemate Publishers and Kagero Publishing for giving me the opportunity to review this book.