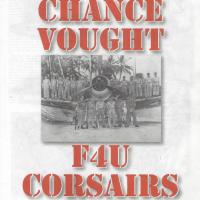 Opening the package of decals you will find two large sheets of beautifully printed markings for no less than nine Corsairs These aircraft include mostly F4U-1A’s with markings for two F4U-1D’s and one late war FG-1D. There is no instruction booklet included in the package. However going to the Fundekals website you can download the instruction booklet as a PDF file. I call this an instruction booklet as it is comprised of 24 pages of Color and B&W illustrations and photographs of each of the aircraft covered on the sheet. Also in the booklet are precise instructions pointing out the various differences in each of the covered aircraft. A detailed history of each covered aircraft and its pilot is included. A really nice touch was a page covering the various different antenna arrangements. Covering, as they say, “Some stuff you might not have known”. Another page explains “New research on insignia colors in the Solomons. 1943-1944”.

Included are markings for two of Maj. Greg Boyington’s planes flying off Valla La Vella in 1943 as well as a plane for Maj. Marion Carl of VMF-223 on Bougainville. Most of the covered aircraft are in the three-color Non-specular White/ Non-Specular Intermediate Blue/ Non-Specular Sea blue scheme with the later warplanes in the glossy sea blue scheme. One covered plane was flown by 1st Lt. William Eldridge Jr. flying with VMF-441 who won the Navy Cross for downing four Japanese aircraft while defending the USS Laffey during the massive kamikaze attack on April 15, 1945.

The sheets include star and bar national markings as well as the white sealing tape. The profiles for the aircraft point out the variations found in the sealing tape and how it was used only as needed and could change on any given day. The decals were thin and printing registration was spot on. The decals worked well with Micro Set and Micro Sol.

I used the markings for the F4U-1A in VMF-321 Hell’s Angels. This aircraft had yellow prop hub as well as yellow on the leading edge of the horizontal stabilizer, vertical stabilizer and tip of the tail. I mixed a little Tamiya flat red into some Tamiya flat yellow to get the correct shade of yellow. After painting the undersides with Tamiya flat white I used Aeromaster intermediate blue and sea blue to finish the three-color scheme. The plane also had two different names painted on the cowling as well as two different pilots’ names under the sliding canopy. By this time in the war, there were more pilots available than planes so they were shared. Each pilot named his plane and they are covered on the sheet.

I enjoyed working with these decals and I highly recommend them for anyone wanting to do a Marine F4U Corsair. If you have the display space and can build more than one of these big airplanes then this is the sheet to get.