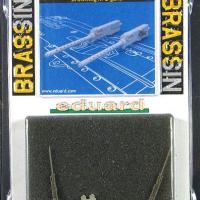 The Browning M2 heavy machine gun needs no introduction. Serving the US Military for over 70 years, it is only out-lived by another Browning design, the Colt 1911. Several generations of fighting men and women all over the world have used the simple and effective design in all climes of combat. Though there have been several medium machine gun designs that have come and gone, the M2 proves that “if it isn’t broke, don’t fix it” attitude, and has remained the main HMG in US inventory. It is hard to believe that the same gun mounted on Shermans during WWII also serves on the Stryker and Abrams today.

As prevalent as it is, achieving the detail of the M2 in 1/48 has been a challenge. Most plastic kits represent the gun as a “stick on a box”, and some resin has been marginally better, offering at least an attempt at the cooling jacket, feed and ejection ports, and trigger mechanisms. Some white metal offerings did better, but again offered marginal improvement, mostly having to do with the classic method of scratch-building a master, and then casting copies. Detail was limited to a person’s eyesight, tools, and materials of choice.

Now, with the appearance of Computer Aided Design (CAD) and 3-D printing, it seems we are only limited to what we can draw on a computer! As long as it can be drawn, and then printed, details can be captured. This modern process is giving us unbelievable detail that was unobtainable just a few short years ago. Eduard’s Brassin line takes full advantage of the technology, and now presents us some fantastic looking aircraft M2 Browning HMGs.

The parts come in a blister pack similar to Aires sets, with the resin parts sandwiched in the larger compartment with some foam rubber. In this set you get two machine guns, plus the firing solenoids, for two complete guns. If you need more, Eduard also makes a pack of six (#648075). The guns are the “light” version with the cooling jacket, and designed for a stationary, internal mount, such as a wing or fuselage. No mounting hardware is given, nor are there any triggers or sights included.

Detail on the guns is first-rate, with some very fine cooling jacket perforations, rivet detail on the receiver, and outstanding depth in the ejection and feed ports. I have provided a couple of close up shots (between 10x and 12x zoom) so you can see the detail. A small tip will need to be cut off the barrel – thus the limits of resin casting. You will then need to clean up the tip and drill or poke a bore hole to restore this detail.

Not much to assemble, as you will just need to cut off the solenoid and mount this per the instructions. With that complete, mounting them in the aircraft is left up the modeler.

I lined up the Brassin M2 with a few from a couple of kits in the stash. In the comparison photos, top left down, are:

The first noticeable item beyond the obvious detail improvements is the difference in diameter of the cooling jacket compared to the GWH items. This caused me to do some research and look at photos of M2’s and compare the parts. Looking at them, I am now under the impression that the GWH cooling jacket is way over-scale, and the Brassin ones are about right. Upon looking at the old Monogram parts (now approaching nearly 30 years old!), we can see that they are a nice improvement, especially in the cooling jacket. The newer Revell guns are better, but still the resin wins with the overall better detail.

I can’t wait to use these in either a B-25 or PV-1 build I am working on. I will probably end up using them as waist guns and add some PE triggers and sights myself. Hopefully, Eduard will follow up this release with a set of waist guns that includes a small PE fret for the sights and trigger, and maybe even a resin ammo feed chute. If there was any improvement to be made to this set, the inclusion of some feed chutes would have been nice, as even wing mounted MGs use them. With the CAD and 3-D printing, they could do both empty and loaded chutes! Regardless, I highly recommend this set for your next build needing a few detailed fitty-cals.

Thanks to IPMS USA for the chance to review these and Eduard for supplying the sample!

Comparison with kit parts
Previous Next