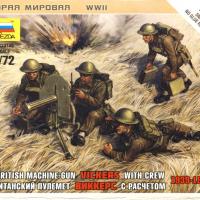 This is another kit designed for Zvezda's war-game "Art of Tactic". This time it is a Vickers K machine-gun with a crew of 4, used by the BEF in France in 1940.

There are 25 parts including the gun, 4 crewmen, a base, and a flag piece for the game, as well as a movement card. Most of the parts make up the crew, with only 4 parts for the gun, and one of these includes the arm of the gunner. It is the usual snap-together kit made out of their usual softer plastic. The parts can be trimmed with a sharp knife but cleaning up the mold line on the figures is difficult. Tamiya liquid glue was used to help keep things together.

The kit crew consists of a sitting gunner firing the gun, a loader with ammo can and belt of ammo, the gun commander who is lying down looking through binoculars, and an ammo carrier who can be mounted on the overall base or on a separate base. The gun is attached to the gunners arm and has a separate tripod and shield. I didn’t use the shield as I couldn’t find any pictures of it in use in combat. There is no water can or hose. Not sure how well the gun would operate without these, as it is water-cooled.

The detail is good, especially on the figures, each comprising 5 parts including a trenching tool. One thing missing, though, are any personal weapons other than what looks like a holster on the commander. I would think they would have at least an Enfield rifle or two.

Once again, gamers will love the detail and diorama builders will, too. I was hoping to borrow the gun and add it to my LRDG truck, but with the gunner’s arm attached, it kind of defeated the purpose.