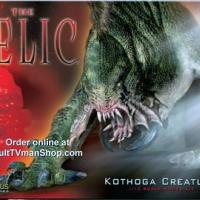 Once in a while, you see a movie that, while not hugely financially successful, makes for a great 2 hours of fun. Such is the "The Relic", a 1997 monster flick starring Penelope Ann Miller, James Whitmore, Linda Hunt and Tom Sizemore. It shows up on cable pretty regularly and if you have the chance, watch it. The star of the movie is a 12 foot long mutant creature called the Kothoga that is part mammal, part reptile and all bad. It likes eating brain parts. Stan Winston Studios produced the monster and did it perfectly. Pegasus Hobbies has given a great opportunity to model the creature with this kit.

The kit itself is a mini diorama which contains the creature, a large museum base (the entire movie was shot in the Natural History Museum in Chicago), stanchions with rope, a name plate and a figure of the relic. The relic and Kothoga are molded in vinyl and the rest is in ABS plastic.

The base is simple; I primed it and painted the tile white then masked and painted the carpet red, several coats of red for coverage actually. I then used a liner brush and painted the tile grout black and flat coated the entire base. I then used heavy coats of Testors Gloss clear to make the shards of glass littered over the base look shiny. The railings were painted with Alclad chrome and the red ropes with Reaper Miniatures Blood Red and covered with gloss coat also. These were glued in place and the name plate coated black and then hand lettered and glued in place.

Now that the base is done, let’s look at the creature. It comes in about fourteen hard vinyl pieces. They required minimal to no trimming and the fit of the parts is great. These parts were glued together using CA and Zip Kicker to cure. Assembly took maybe 20 minutes total. There were minimal seams left and to cover these, I used Aves Apoxy Sculpt. It took two coats near the major leg seams and I did leave all the mandibles off until later. Since this is vinyl, it is critical to get a good primer on it and I used Tamiya Primer Surfacer which cured. Unprimed vinyl will react with enamels and leave them sticky forever- unfortunately the voice of experience elsewhere. Two coats of this were left to dry over night and the painting began with the underside being coated RLM tan. I then used a bright German green to coat the top. I started bright as I was planning on darkening the model as I went with washes so I knew it would dull down. I then sprayed a darker green (IJN Green from Tamiya) in a striped looking pattern. The mouth was painted pink and the teeth white and the entire kit flat coated. I then added an oil wash of brown/black to the kit and let it dry. To paint the details, I sued another three green colors to highlight the molded in scales/bumps. These were picked out in patterns and the eyes were also painted. I then lightened the initial tan and highlighted the under side with streaks and raise areas receiving a shot of the light tan. I sealed again and dry brushed the scales with either pale green or unbleached titanium dioxide. I sealed the entire kit with a 50/50 mix of dull coat and gloss coat to get a medium sheen. The eyes and mouth were gloss coated and added some drool (the monster was very moist in the film) with 2 part epoxy and stretched clear sprue.

The last thing was to paint the relic it self. It is vinyl so I followed the same prep steps and then painted it black followed by multiple dry brushes of several grays. The relic and Kothoga were added to the base and done. Less than a week total but a great week of fun.

Recommended- heck yeah! This kit is simple but a great representation of one of Stan Winston's gems! It is easy enough that a teenager would be able to do it with minimal guidance but is so well detailed that hardcore fans like yours truly would love it. And the price for what you get is a true bargain.

Many thanks to Larry Thompson and Pegasus Hobbies for the kit and to IPMS for the chance to review it.

Close up of drooling monster's head

Right rear leg and "tiki" thing on base

Left side view of monster's head
Previous Next