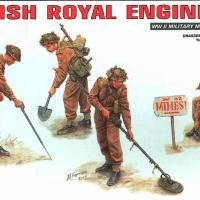 This set consists of 4 figures all conducting land mine removal.

The figures come on two sprues with 67 parts, the bulk of which are the odds and ends that the soldiers are carrying. The box art and instructions on the back of the box show the figures as completed. The first figure is using a probe to find mines, the second is digging with a spade, the third is removing (or placing) a mine, and the fourth is using a mine detector. The poses are well done and depict a reasonable amount of action.

The set had very minimal flash and no ejection pin marks. What mold lines that were there were easily removed with a sharp blade. There are no decals and the painting instructions are just for the major items. You will need to copy what you see in the illustration or consult your references for actual colors for the badges, shoulder boards, and metals. The paint colors are coded for Vallejo, Testors, Tamiya, Humbrol, Revell, and Mr. Color.

If you are one of the figure builders/painters that subscribe to the concept of “if it is a plastic head, replace it with a resin one”, then you might want to do so with this set. The facial expressions are well done, but seem almost identical. There is one exception, the soldier with the shovel has a big bushy mustache, and you may want to keep that one. The rifles did not come with straps so you will need to make these from foil or tape.

I constructed the figures using a Tenax type of glue. This softened the plastic enough that as pressure is applied to the joint, some dissolved plastic will ooze out. After hardening any excess can be cut or sanded away. I used very little filler. The fit was acceptable and little adjustment was required to get the proper poses. However, it turns out that two of the figures have equipment problems. The soldier using the probe has it showing several inches into the dirt. With a little arm and probe manipulation prior to gluing the arm on, that can alleviate the problem to show the probe only a couple of scale inches into the dirt, ready to set into a diorama. The soldier using the land mine detector has a much bigger problem. The device is molded as one piece and the easy adjustment of moving it back will not solve the problem. This will require some modification of the device to shorten it enough to be displayed with the sensing portion above ground.

Conclusion – This set is a mini diorama waiting for you to create a mine removal scene; perhaps with a Sherman Crab flailing its chains in front of this group doing cleanup. It is well done and as with most of MiniArt’s figures sets, different and eye catching. Don’t let my figure painting deter you from this set; it is much better than what I painted.

Parts on sprues in kit

Soldier with mine probe

Soldier with mine detector
Previous Next