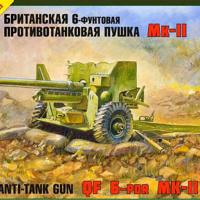 The old adage Things get better with age may old true to a number of items but this is definitely not one of them. This kit started life way back in the old days! It was part of the Max Peerless line and was hitched to their 15CWT and released as kit 3508. Then, Italeri released the gun as a 6 lb. Gun M-1, kit 323. That version included a nice base with fence and ammunition and ammunition crates. Testors added their name to the box and titled it Anti-tank Gun M-1 and changed the kit number to 781. This latest incarnation by Zvezda is nothing new, neat, or improved. It is just the gun. It has suffered from time, as the kit has never had the molds touched up or maybe even redesigned. The parts are riddled with ejector pin sink holes and raised bumps, as well. Some are located on parts that the builder will damage trying to remove them. The most noticeable of these are located on the outside portions of the trailing arms and the outside faces of the gun shield. The tires (both of them) have odd blemishes on the outside faces that appear to have been caused, perhaps, by over-pressing the molds. The box art shows a six pounder in a static position behind a single layer of sandbags or rocks. There are several empty shell casings and live rounds littered about the ground. Don’t get your hopes up, as these are not included. What is included are two sprues of grey plastic making up the gun, and a fold-over assembly sheet and painting guide. The colors are referred to by Humbrol names.

Assembly was straightforward and easy to follow. However, many parts needed to be sanded after being joined just to make them true. Mold lines ran rampant on many parts. The barrel suffered from this, and I was terribly afraid that sanding this would destroy it. The sanding went well but the drilling of the inner barrel (to make it round as opposed to oblong) almost split the barrel lengthwise. A note about the plastic – as I started assembly, I noticed this was a very soft plastic. It was very similar in texture to the old Tauro plastic and the newer Games Workshop plastic. It was a softer, more vinyl-type styrene. This may have added to the molding imperfections that the kit has.

Many of the parts that joined to other parts had large gaps where the parts joined, most notably on the trailing arms. Almost every part that attached to these was so undersized, it was unbelievable. I had to superglue the trailing arms in place. The locating pin they attach to were so oblong, there was no way of trying to round out the trailing arm pieces in hopes of making the arms moveable as they are supposed to be. I then had to drill these parts to fit the gun shield into the proper position. This part is ultra-fragile. The slightest amount of pressure applied to the ring bends and almost breaks it.

The gun was painted Model Master Olive Drab, as I had this out for the Bronco GPW. The tires were painted black and glued onto the cradle. I opted not to wash or weather this as I wanted it to be a monotone OD color.

This is a nice beginner’s kit. However, with a $20.00 price tag, you might be better off searching eBay, local hobby shops (the ones that buy collections), or model shows for the old Testors/Italeri release or the Max Peerless, as both of these can still be found and usually sell for about the same $20 price tag and you receive more for your money.

I would like to thank Zvezda for producing this “Blast From The Past”, but as a long-time armor modeler, I feel it should have been left buried in the mold archives. I would also like to thank Dragon Models USA and IPMS-USA for providing the review sample and allowing me the stroll down memory lane. I hope this review comes in handy to show other modelers that oldies never die…they just get passed on to others to remold and release.