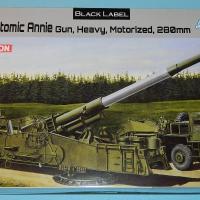 Thanks up front to Dragon USA and to IPMS leadership for providing this kit to me for review.

This kit is an answer to an oft-repeated wish of the post-WWII armor crowd: A new-tool 1/72 scale atomic cannon. Why 1/72? Because even in transporting position, it is only 1 ½ feet long. The existing, much older and less accurate 1/32 kit from another age, at almost two and a half feet long when in transport position, was just too big to display for many. It had a lot of operating features, and looked like the actual item, but in reality is better served by a 1/72 scale model in my opinion. That said, if Dragon ever scales this thing up. who knows how it will sell?

The Black Label series is Dragon’s effort at competing in the challenging and changing field of armor models. The various SIG’s and such for armor exhibit strong influence on kit manufacturers, so this model is obviously an example of what can be done when the market speaks. The last time I checked, the average armor kit had between 300 to 700 parts. That is a LOT of quality modeling time, and Dragon is well in the fight.

I’m going out on a limb and confessing my experience with this particular bit of weaponry is based on videos, other people’s research, and spending time crawling around one of the actual weapons at Fort Sill here in Oklahoma. Back in the 1960’s the center carriage was on display without the transport tractors on Artillery row at the site of the original fort. You know how well the signs that say “keep off” work on young, exuberant males when authority is not watching. That was my first experience with “Atomic Annie” in 1969. Since then I have had occasion to visit, and about three or so years ago was dismayed to note that everything was missing on the display row.

Nobody at the time seemed to know where the iron had gone. But last year I meandered by the new artillery museum on the lower part of the hill (which has, to my dismay, been closed even during the three occasions I have dropped by when the museum is supposed to be open, probably sequestration). But the really good thing: All the carriages and artillery pieces have been cleaned up, repainted, and put on display - including Atomic Annie! Pictures accompany this missive.

On to Dragon’s kit. What is in the box: I counted 274 finely-molded neutral-gray plastic parts for the transporters, the cannon, and clear plastic parts, and a decal sheet with two marking options for Germany-based cannons. The detail is phenomenal in this scale and everything seems to be in place or available to be put on the model. This is another example of what can be done when you research and put extra emphasis on accuracy. I’m certain there are others out there who will find fault with any kit they didn’t personally build from paper, straw, and rock into a masterpiece, but I’m not one of those. This kit is, for lack of better words, at the top of my personal list for a challenging building experience.

Wheels are incorporated into the tires. The tires themselves are two-sided affairs, with locating pins to make sure the tread is correctly oriented.

I began the build by using Tamiya Olive Drab 2 spray on all the parts while on the trees, which appears to be more accurate than the kit’s instruction to paint the model Luftwaffe 82 light green. I do this on armor and vehicles because I then assemble the kit, then re-spray after everything is cemented into place, which hides glue marks, etc.

Nothing is noted about interior colors, so I assumed it was all the same for the interior, with the exception of Black-Gray seats, steering wheels, and whatever you want to paint the interior switches and details. I have no photographic evidence, so it’s up to you.

With the exception of leaving off the clear windows (which install from the outside, no masking, yay!) and the wheel and tire assemblies (Painting and installing them after spraying the tractors post-assembly made more sense), I followed the instructions on this build. Part of the problem is several steps which must be done first, and there are the usual alignment problems if you don’t construct the kit “square”.

The front tractor was a one-night build for me, as I took the time to re-do a couple of steps which had parts in questionable locations until follow-on assembly showed I had the parts in the wrong place. The arrows sometimes don’t show the correct location, so be forewarned. Also, there were a few mis-numbered parts on the instructions, such as the forward transaxle gearbox. Use the drawings to make sure the part you are installing is what you need, when. In this case, the tab on the top of the transaxle would only fit the slot on the gearbox, so it was a relatively easy step. Also, make sure you put the leaf spring assemblies on correctly and fully in their mounting slots on the body frame. All four wheels on the ground is the object. The two-piece wheel and tire assemblies were the only “tedious” part of the build. There are 13 halves to assemble, and paint. Fortunately the wheels have prominent scribing or rims to keep the black paint in check.

The details on this model included a cable winch with no cable - I used floral wire to simulate this on the drum. The spare tire crane and ammunition crane on the forward transporter and the gun carriage could also use some cable. I did not to that in this case, as I have a time imposition.

The Aft transporter was next, and it also had plenty of detail and opportunities to be wrong. Not really the fault of the parts, it’s just us humans. In the end I had two transporters minus their tires, ready for final paint. In this case, I finished these items with more of the Tamiya Olive Drab 2 spray from a rattle can. It looks about right for this scale, and met the requirement. Once this was dry, a bit of clear gloss was applied for decal prep, then it was on to markings.

The markings are one area where the instructions failed. Although the decal sheet had numbers for placement, the instructions did not. It was difficult to figure out which decals went where on the model, particularly since the diagram is almost too small to read the markings on the general arrangement drawings. I did the best I could and it looks ok, but at a retail price of over $80, I expect useful instructions at the least for the decals and markings. As stated before, there were a few questionable areas for part installation or mis-numbering on the sheet, but I figure most modelers are like me and will figure it out. This is not a kit for the kids down the street.

The few minor things noted in the last paragraph aside, I considered this to be a fun weekend build. Detail hounds will go to town on it. I built it mostly out of box, so it’s as it is; missed paint areas by this modeler included. Be prepared and go buy one!

Thanks again to Dragon for providing IPMS this excellent model, and Dave and Dick for sending it my way!

All three components of Atomic Annie

Front transporter right side with detail

Rear Transporter left side
Previous Next