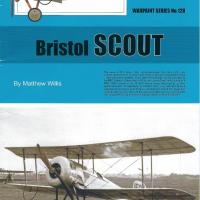 Matthew Willis is a writer of historical and speculative fiction, and non-fiction. Matthew studied Literature and History of Science at the University of Kent, where he wrote an MA thesis on Joseph Conrad and sailed for the University in national competitions. He subsequently worked as a journalist for Autosport and F1 Racing magazines, before switching to a career with the National Health Service. His first non-fiction book, a history of the Blackburn Skua WW2 naval dive bomber, was published in 2007 by MMP. He is the author of the 'Fortress of Malta' series of novellas from Sharpe Books (2019-21) and co-author of the 'Oath and Crown' novels of the Norman Conquest (2017). In 2015 his story Energy was shortlisted for the Bridport short story award. This is Matthew Willis’ second publication in the Warpaint series, following his previous publication on the Sopwith Pup.

Originally designed as a racer in 1913, the Bristol Scout was a small, very light aircraft. Flying mainly reconnaissance missions, pilots would try to shoot out of them with pistols and rifles, but the nimble Scout required the pilot to be paying attention and have both hands on the controls. Several solutions were tried, including shooting obliquely or over the prop circle on the upper wing. Surprising, many flews with a machine gun firing through the propeller arc with the hope that most of the bullets would miss the propeller blades. There are color photographs on page 39 showing the effect of this technique. In the field, holes in the propeller blade would be plugged and wrapped in doped fabric. You learn something new every day! Eventually the British figured out how to use an effective synchronizer, but by then, the Scout had been removed from front line operations and relegated to training. The Bristol Scouts hung around as they became a favorite of senior officers as a squadron hack. Interestingly, the Bristol Scout was the first land plane to fly off a ship on November 3, 1915, in an attempt to get a leg up on the German airships. The Chapters include:

What I found interesting was the number of changes that occurred to the Bristol Scout. Many of these changes are minor, but they were made during the production runs of the Scout C and D and retroactively. Many of the Scouts were delivered without engines introducing a variety of differences to which engine was installed originally or changed along the way. This affected the cowling, which even with the same engine, saw changes. Other changes related to the guns installed as there was really a lot of experimentation. There are other interesting tidbits, but I will leave those for the reader to discover.

I honestly was surprised how easy a read Matthew Willis’ monograph was. The text is well supplemented with clear photographs and detailed captions. John Fox provides the 1/72 and 1/48 line drawings along with scrap color illustrations and color side profiles. This is an excellent reference on the Bristol Scout and would be a valuable addition to your reference library. Whether you are building the 1/72 MAC or 1/48 Gavia kits, I would consider this edition essential as an aide to your build. I was able to read this tome easily over two nights. If you own any of the previous releases in the Warpaint series, you know what you are getting. If this is your initial entry into this series, you will be quite pleased.