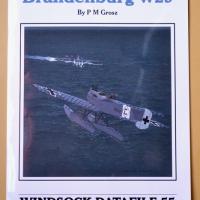 With Wingnut Wings release of dual boxings of WWI floatplane kits, Albatros Productions has decided to again offer a limited edition reprinting of its long-out-of-print Datafile 55 – Brandenburg W29. The subject must be a popular one because this is the second time Albatros has reprinted this Datafile.

The Brandenburg W 29 was a low-wing two-place monoplane with twin-floats that gave the German Navy a superior fighter-bomber which was both aesthetically pleasing to the eye, and superior in performance to the various biplane floatplanes in service at that time. According to British Naval Intelligence reports following their first encounter with the W29, the Brits were quoted as saying, “the enemy machines were considerably faster than the F.2A flying boats” and “the new monoplanes, seen for the first time in this action, proved to have formidable qualities”. Ernst Heinkel was the technical director of the Hansa-Brandenburg Company (AKA Brandenburg) during this period and was, in large part, responsible for developing a series of floatplanes for the German Navy that culminated in the W 29. The German Navy ordered more than 300, and 209 were delivered before war’s end. For years after the war, the W29 also was license-built for the Austro-Hungarian Navy as well as those of Denmark, Finland, Latvia, Norway and Japan.

Unfortunately, in spite of its popularity and great reputation, few photos of the W29 exist today. Fortunately, Albatros and the author gathered enough to publish a comprehensive Datafile about the subject. The author is Peter M. Grosz, a world-renowned expert on German Aircraft, and he has done his job well in Datafile 55. In this 32-page book, he delivers a complete historical narrative and enhances it with 50 large black and white photos, a number of original Brandenburg factory drawings, three-color profiles by Ronny Bar, six black & white profiles and a dramatic color illustration by Bryan Knight on the front cover. Added to this are six and a half pages of 1/72 and 1/48 scale drawings of early and late variations of the aircraft by Colin A Owers. Some of the photos feature details of interest to model builders, including views of the front and rear cockpits. Two pages are devoted to camouflage and markings, and the aircraft’s distinctive printed lozenge fabric is illustrated with color call-outs (colors are listed by Methuen numbers with a number of FS 595a references). An appendix is included listing orders and deliveries, and Editor Ray Rimell then provides a listing of Brandenburg W 29 kits that has been updated to include the latest 1:32 scale Wingnut kit.

This publication is highly recommended to WWI aircraft model builders, those with an interest in WWI aviation history, and especially those interested in WWI floatplanes. Datafile 55 can be ordered directly from the publisher via the website listed above. My thanks to Albatros Productions for providing the review sample of this excellent publication, and IPMS/USA for the opportunity to review it.