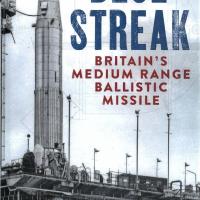 John Boyes was born in Edinburgh in 1947. Educated at Rugby School, he qualified as a chartered accountant in 1972 and thereafter pursued a career in the motor industry until his retirement in 2005. He has had a lifelong interest in the history of missiles and published his first book, Project Emily: Thor IRBM and the RAF, in 2008. John followed with Thor Ballistic Missile: The United States and the United Kingdom in Partnership in 2015. He is the treasurer of the Royal Air Force Historical Society and financial controller of the Bomber Command Association, responsible for the financial management of its memorial in London. He has given a number of lectures on Thor and regularly contributed to the British Nuclear History meetings at Charterhouse. He is married and lives in West Wickham, Kent.

John Boyes kicks off in the Prologue with the German V-2 Ballistic Missile that led to huge head starts by the USSR and America, but not necessarily by Britain. Considering that the USSR was the only one of the big three to come through WWII with its country leadership intact, the USSR’s lead is not surprising. Truman’s signature on the establishment of the US Atomic Energy Commission 1947 was the dagger in the back of Britain (and Canada), both who had helped contribute to the Manhattan Project. The British outrage led to Britain establishing its own nuclear bomb program although it was aggravated by competing political priorities. Of course the British failure to identify Dr Klaus Fuchs as a Russian nuclear spy did not help the Brits’ reputation in the US.

The move to use ballistic missile technology instead of aircraft delivery of atomic devises wasn’t a big secret, but the Russian’s test of August 12, 1953 of a thermonuclear device caught the US by surprise. Although not as powerful as what the US had available, the Soviet’s bomb was small enough to be delivered by a missile whereas America’s device was far too bulky and heavy to be launched by a missile. John Boyles capably leads the reader through the political and technical difficulties of Britain to develop a medium-range ballistic missile (~1,500 nm range) in coordination with the America’s drive to develop a long range ballistic missile (~5,000 nm range). All the highs and lows of the project are considered up to the Blue Streak’s ultimate cancellation.

So the Blue Streak program was cancelled after all that money invested? Actually no, as John Boyles relates, the Blue Streak survived just a bit longer as it found a civilian role as the booster for the European Launcher Development Organization (ELDO). Meanwhile, America signed British support to help develop an air launched ballistic missile, Skybolt. John dives in whole heartedly and provides amazing insight into the political and technology issues that the Skybolt program entailed. The end of Skybolt arrived when the US pulled out of the project. Of course the end result here is the Brits got access to America’s Polaris missiles, so we finally have a happy ending! The sections include:

There is a lot of technical details and more political machinations present in this tale, but John Boyes is able to put it all together into an easy-to-read book. I read this tome over three nights and it was hard to put down. I missed John’s earlier books, Project Emily: Thor IRBM and the RAF, and Thor Ballistic Missile: The United States and the United Kingdom in Partnership, but my order for both is on its way.

Blue Streak models are few and far between, but Niels Paper Models offers a 1/96 paper model for download. Anderson Models offered a 1/144 scale resin kit in 1998, but it is currently out of production. The GAM-87 Skybolt missile is available in 1/72 and 1/144 through several resin manufacturers and feature both the standard nose as well as the heavyweight nose.

My thanks to Fonthill Media, Casemate Publishing, and IPMS/USA for the chance to review this great book.