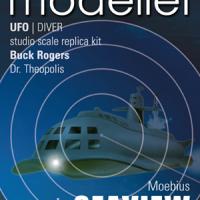 This is the first issue of SciFi and Fantasy Modeller I have had the privilege to review. Since first seeing the review in the IPMS/USA Journal on Happy Medium's “The Steampunk Modeller” and getting my hands on this issue, I have subscribed to the publication and purchased “The Steampunk Modeller” vols. 1 and the upcoming vol. 2, as well as the special issue “Exercises in Iimagination and Scratchbuilding” . You could say I have become a fan.

This issue is 98 pages in full color, and includes 13 articles within those pages. The largest and most important article is, of course, the cover story about Moebius' new 29" long movie version of the Seaview submarine from the 1961 film “Voyage to the Bottom of the Sea.” There are actually 2 articles in this issue about the Seaview sub, the second being about the making of the Moebius kit based on the filming miniature from the television series of the same name, but more on those articles when we get to them.

First up is a well-written article from one of my new favorite British modelers and the publication's Specials Editor, Andy Pearson. Andy takes the relatively simple Area 51 UFO kit by Pegasus Hobbies, and scratchbuilds a hanger for it reminiscent of the government warehouse in the film "Raiders of the Lost Ark," complete with piles of crates, scaffolding, and 1950's era security figures.

Second: Barry Ford builds and paints a 1/7 resin kit of what I instantly recognized as an obvious knock-off of a World of Warcraft Wood Elf character. It was clear from the article that Mr. Ford had no idea what the subject was about, but he did a fine job with it, gave it an excellent custom paint scheme of his own devising, and clearly enjoyed the experience thoroughly.

Third: Jim Costello scratchbuilds an internally-lit Dr. Theopolis avatar from the television series “Buck Rogers in the 25th Century” in 1:1 scale to the original filming prop.

Fourth: Keith Fraser scratchbuilds an excellent “Gray and Houseman Tractor” from the British television series “The Thunderbirds.” This build is a must-see if you are a fan of the series. There are 8 pages of excellent full-color photos and commentary to follow.

Next: Part Three of the article “Alpha to Omega,” which Phil Peterson reviewed initially for Vol. 24 (http://web.ipmsusa3.org/content/sci-fi-fantasy-modeller-volume-24). The author, Bernie Walsh, documents his process while scratchbuilding “Moonbase Alpha” from the film “Space: 1999.”

The sixth article, by Gary Kerr, documents the process that Moebius Models used in designing the new 29" movie Seaview model kit, which I will be building and reviewing for IPMS/USA as soon as the kit arrives. Moebius has already released the 4-window TV version of the kit. However, the design of this new kit is unique, since the only surviving original filming model is the 8-foot long 4-window TV filming model in someone's back yard. The original movie filming model was cut up and repurposed for the television series. So they had to reverse engineer and re-created the movie version ONLY from the surviving measurements, surviving concept art, and the DVD of the movie!

Immediately following is the review and inspection of the new movie Seaview kit by Editor-in-Chief Mike Reccia. The kit is just huge and gorgeous. It has ample room for lights, and can even be fitted to function underwater by R/C submarine enthusiasts.

Then Andy Pearson builds the Revell re-release of the Vostok 1, the first manned spaceflight piloted by Soviet Major Yuri Alexejewitsch Gagarin, on April 12, 1961.

A prolific modeler, Andy Pearson then immediately builds Moebius' Space Clipper kit from the film: “2001: A Space Odyssey,” complete with aftermarket Pan Am decals. He then goes a step further in building another Space Clipper kit, modified with resin parts for piggy-back-boosted terrestrial launch of the craft, as well as scratchbuilding a launch rail system as described in the Arthur C. Clarke novel, but not the film.

Marco Scheloske then gets 7 pages with an article about a paper spaceship model based on the German Perry Rhodan novels. The wonders of modern technology allowed the author to use a CAD-design to print his paper templates, which builds into an amazing model when finished. The templates can be purchased online for the reader to download and build their own, if they so wish.

Tucked in on Page 88 is a book review for “Spaceships of Science Fiction” from Ian Allen Publishing, which I had first mistaken as an advertisement, but is a very positive review.

Lastly is the second part of an article started in vol. 23 about SKY/DIVER, a submarine that launches a jet from its front part. An interesting subject I have never heard of, but which resulted in a great-looking model kit.

I would like to thank IPMS/USA and Happy Medium Press for the opportunity to review this magazine.