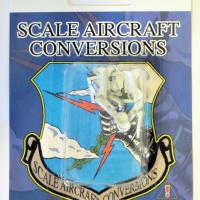 The Airfix 1/72 Buccaneer S.2 was released in 2019 and this set from SAC is a direct copy of that kit’s landing gear. The set contains both main gear legs and the nose gear leg, with the actuator strut for the nose leg also included. This set departs from the kit in that the lower forks of one side of each main leg are included as separate pieces, presumably to aid with construction as the original legs are in two separate halves.

No instructions are provided, as the use is fairly self-explanatory; being copies, the legs have the same attachment points as the kit parts and should be drop-in replacements.

Despite being direct copies, these white metal pieces have lost a lot of definition and finesse compared to the kit parts. In addition, the separate forks add an element of weakness not present in the kit.

The main purpose of these sets is to add strength to what can be a weak area in heavy models, however, the Airfix 1/72 Buccaneer is not a heavy kit; mine has happily sat on its kit landing gear for almost 3 years with no issues. Therefore, I don’t feel that this set really adds anything to the base kit; it is up to the individual if they feel this particular set is for them.

Many thanks to SAC for the review sample.