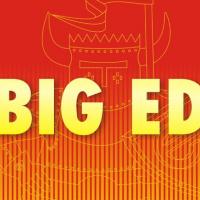 Thanks as usual go to our prolific supporter, Eduard, for sending the IPMS/USA review team this BIG ED for the new Revell 1/32 P-51D-5 series Mustang. This was another in my series of “On-the-road” reviews, and as such the background will change… a lot. I had misplaced the review item before I left the house while cleaning up my work area, and right before I left in desperation I sent an order to Sprue Brothers to please send me a replacement, (after I used my credit card), to handle on the road. I also asked they annotate my name and the point I was a guest in the “GJOEHOFOE” hotel in California. This was dutifully marked in large, clear lettering on the front of the box, and as such there was no confusion about who the guest (Me) was, or what do to with said package. It got there on Wednesday afternoon, three days before I left for the hotel-hopping part of my trip (where much of the work you see here was done). Onward!

I opened the standard weighty Eduard sleeve card envelope and was greeted by a deluge of parts. Lots of them… on four frets and one kabuki tape masking square with covering for painting the canopy and all that. JOY!

I determined after reviewing the parts setup and the kit instructions the beginning was to be the wing wheel well assembly. Some judicious removal of detail from the well was accomplished by using my new Micro chisel from Mission Models, which made short work of the stringers and other little details on the inner surface of the upper wing that would have been impossible to remove otherwise. Another “How-did-I-get-along-without-a-tool-like-this-over-all-these-years” moment for pondering…

You as the builder need to take serious care in avoiding inadvertent bending of the metal parts while removing them from their frets. A NEW #11 X-Acto blade was pressed into ongoing service, and over the course of about 15 hours and two new blades proved to be the appropriate tool in removal, bending, straightening, and assembly of the parts. I wear safety glasses as a rule, which more than once prevented the occasional “flying shrapnel” inherent in PE removal from entering my eye. I DID have a close call, so even with safety equipment, so it’s a great idea to use caution.

The instructions indicated to use a ball-point pen to press external stiffener braces into the part where an indent for strength was already etched. This was actually FUN. (shhhhhh). The parts were carefully bent to shape, and after a bit of special language and superglue gel, everything was in place. It DID look better than the plain ol’ plastic.

Next up was the cockpit, sometimes called the personnel navigation, destructive device activation, personal bodily activity, and command center by the new PC flakes, but I’ll refer to it in the proper term. COCKPIT.

(Old people out there: Remember the old days when we scratched lines on a black-painted white plastic card cut to fit behind a clear sheet of plastic and the actual bezels cut in the front panel? And then DETAIL painted by pretending to scribble and dot matrix our own words on the instruments, etc? or just drybrushed the efforts of the modeling craftsmen who worked the detail dies? )

I finally figured out the secret to making all the little “foldie-in-halfie and glue in place” handles and switches which were pre-painted, touched to superglue puddles, then CAREFULLY tweezed into their mounting slots or holes… take your time, and be S.L. O.W.. I have been in too much of a hurry in the old days. Of course, I refuse to work 1/72 PE for anything except a two-part instrument panel. This could drive me back to the bottle… Touch up with red paint and be done!

Various panel parts, levers, and placards are included on the etch set, and there are extra parts in a couple of places for the ham-fisted among us to cover the dreaded “click”, dangit, where did it go” moment.

Other parts are included for various boxes and panels: IFF controls, (with masochistic little switches you must insert into slots from behind on one panel; five on one side, three on the other), oxygen controls, etc…. then the microscopic switch guard rails on each side of those. Don’t be drinking at this point.

Next up: building the radios for the rack behind the seat under the canopy. The main radio box is built up with a five-sided support box structure; just fold toward the etch side lines, not against them. Over this is placed the box top with detail OUT. Next slip the four-part detail facings over the box you have just constructed and glue in place. (These sides are all one part with fold locations etch marked appropriately; again, fold TOWARD the etch mark…)

If you have done all this correctly, you will have an oblong box with detail on five sides and an open underside (duh). To this assembly you glue eleven very small parts; four edge reinforcements (bend each to 45 degree angles as box reinforcements, again, detail side out), four placards, (two on the front side, and two on the top), and four latches with the latch toward the top. You ARE using a magnifier to keep eye strain down, right? The battery box is next, with similar construction.

Logically, the next operation is to attach all the facings and placards for the cockpit side rails and what is attached to them like trim wheels, radiator levers, throttle quadrant indicator marking panel, guards, flap controls, and yet one more panel with switches (only three this time, a gang switch set)

The all-important main fuel tank level indicators are attached below the floorboard on top of the wing, below where the ports are located for viewing them through the floorboard.

To be continued… I don’t want to fill up John’s mailbox quite yet.