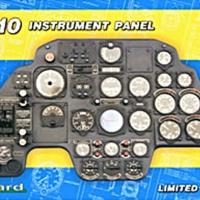 This kit was first available as a bonus for the Bf 110 Royal Class edition and now it is been released as a ‘stand-alone’ kit in a Limited Edition format. You get a whole instrument panel, a sprue full of bezels and levers, two sprues of clear parts, two fret of pre-painted PE and a set of vinyl instrument faces.

Plastic parts are molded in very accurate colors. Still I’ve decided to paint the instrument bezels in black and the back of the instrument panel in RLM 66.

The instructions consist of 13 steps, basically one step from beginning to end for each instrument or set of levers, although a few duplicate instruments are in the same step. I’ve decided to depart for the instructions and build my IP in layers. I was worried that I would knock over a lever or completed instrument bezel while working with the next instrument. By the way, the clear plastic parts are conical in shape hence if when you are assembling the kit the clear part seems to not fit, then flip it and it should fit much better.

I’ve started working with the instrument faces (vinyl stickers), then adding the PE dials, and PE placards, then I moved into the clear part plastic and finalized with the instrument bezels. There were a few deviations from the overall process described above (mainly due to levers and such) but it worked really well and it prevented me from damaging parts.

I’ve only run into one problem in this kit: Part K35. If assembled based on the position of the plastic pins and holes, then it would be rotated 90 deg clockwise from how it is shown in the instructions (and also the references I’ve check). Hence I’ve just sanded flat the pins and glued the bezel in the proper position as shown in the pictures.

It took me about 10 hours to complete this kit. It has a lot of photoetch parts. With the exception of two parts, they all are flat PE parts, but given the high count of photoetch parts I would recommend this kit to the average modeler.

I would like to thank Eduard Models and IPMS/USA for the review sample.