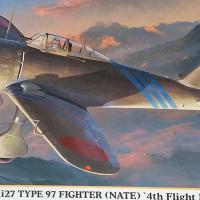 The Nakajima Ki27 Type 97 Fighter, code named “Nate” by the Allies, was designed in 1935 to replace the older Type 95 fighter. It served in the Imperial Japanese Army in China beginning in 1938.

Hasegawa has replicated this interesting fighter in fine detail. The parts were crisp with very little flash on the parts or trees. Finely molded rivets cover most of the fighter, and they look very much in scale, and add a lot of realism to the kit.

Assembly of the kit is straightforward, and the fit is good. The one problem area I ran into was where the trailing edge of the wing meets the fuselage. Here, a mismatch between the two requires some filler and sanding. Overall, very little sanding was needed since the parts fit is excellent.

One flaw to watch out for is in step 6, where you glue the gunsight (part 44) onto the fuselage. Careful handling of this part is required, and it will very easily slip inside the fuselage through the slot provided for it. (This happened to me and I was lucky enough to coax it back out of the fuselage.) There is a notch in the canopy for the gunsight, and that notch may need some sanding in order to fit around the gunsight well. The proper canopy to use is part 46, as there are two canopies provided in the kit. There are subtle differences between the two.

The kit comes with markings for two different aircraft, both from the 4th Flight Regiment. I chose the Commander’s Aircraft from 1940 for my markings. The decals go on well, and respond beautifully to decal setting solutions.

Overall, this is a very nice kit and one that I would highly recommend to others. My thanks go out to Hasegawa and Hobbico for providing the review kit.