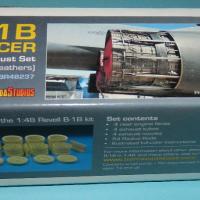 Roy Sutherland has been around for a bit, providing resin details we never knew could exist, but now do because of his commitment to improving basic products. This set is one of four that I used on the new (but old) Revell B-1B… they are in Roy’s “Barracudacast” resin accessories branch of his company. On to the review!

This set is comprised of four sets of exhaust augmentor tubes, four augmentor flame holders, four sets of exhaust nozzles without turkey feathers, and three sets of support arms sufficient to detail all four nozzles. It is relatively simple in concept, but requires some mastery of measurement, plastic removal on parts, and care with removal of the support arms from the casting block. Roy also offers PDF instructions for those who need larger versions on his website.

To be fair to Revell, this kit was released around 1983. It represented the B-1B as it was to be manufactured at the time, and is representative of a kit standard for the era. When complete, it is an imposing model… and deserves more than the basic treatment. The Barracudacast “Featherless” exhausts bring the kit into the new era.

Turkey Feathers? Featherless? Those are the Feather-shaped exhaust air fairing plates around the radius of the exhaust nozzle… they had a habit of breaking off in flight due to vibration and turbulence; after extensive testing with and without them, they were deemed not required and removed from the engines, (on F-15’s as well) with the result being (1) less maintenance, (2) less complaints from citizens about airplane parts hitting them or their property, and (3) no real aerodynamic impact on the jet.

Nice details; the exhausts themselves have great interior and exterior detail. There is, on the flameholder grid, even a carry –strap loop bracket that exists on the actual item. And the exhaust burner lids themselves are works of art.

Preparation is simple; soak for a while in a cleaner like automotive spray tire cleaner (I used “bleach-white”), 409, or whatever, to get rid of the silicone mold lubricant that is inherent in resin casting. Run an old tooth brush over all, rinse fully with water, then allow to dry.

To use this set, carefully use a razor saw to remove the pour stubs from the burner cans, and the turkey feathers. Note that you can cut off too much from the feather assembly… use your references!.

I painted the flameholder grid with duplicolor gray primer, then weathered with pastels. Same for the burner cans; then the white ceramic areas on the flameholder grid were picked out with flat white on a tiny brush. These are very visible on the actual engine, and the internet has excellent detail pictures to guide you.

For the feather radius rod braces, I recommend a VERY sharp #11 blade, and multiple light cuts. This will prevent you breaking them and they will require much less clean up.

The Kit nacelles will require much careful Dremel ® work with a sanding drum at low speed to bring the aft portions within clearance to install the augmentor tubes. Take your time, and make the plastic paper thin toward the back, and the exhausts will fit just fine…. Assemble one exhaust set without the braces, and use it as a measurement device to show how much remains to be removed.

After the model is assembled, I installed the exhausts. I used Testors Magnesium metalizer spray to finish the exterior; some like to really go to town with washes, etc., here, but I chose not to.