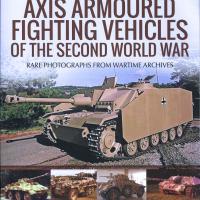 Pen and Sword has released a new book on their series “Images of War”. This book is focused on Axis Armored Fighting Vehicles during War World Two.

The book is divided on 4 main chapters

All chapters have a well-researched introduction to the type of vehicle being described –in the chapter- including development, main roles, tactics (including historical narratives and in some cases representative combat action for the vehicle type), plus sub-sections devoted for specific vehicles (of vehicle family) being described.

Most of half of each chapter is devoted to pictures, including a great balance of period (B&W) wartime photographs of the vehicles in the field -and combat in some images-, plus contemporary images of museum vehicles highlighting specific details (commander cupola, driver compartment, etc). The images are of high quality and very useful if you are trying to get references for your next build.

Most of the vehicles described in the book are of German design, but there are a few Italian, Hungarian and Japanese AFV vehicles included in the book.

In summary, this book has compiled a large collection of high quality wartime and museum images of WWII Axis AFV and organized them in a easy to read book, which strikes an excellent balance between detail, tactical use, a few combat narratives therefore making it be an excellent reference book.

I would like to thank Casemate Publishing, Pen and Sword and IPMS/USA for the review sample.