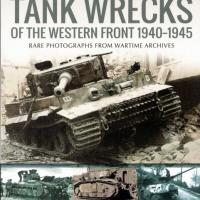 This fine book is yet another in Pen and Sword Military Images of War series of publications. In this book, Mr. Tucker-Jones traces the use and deployment of both Allied and Axis armor through the wrecks left on the battlefields of Europe. The author has previously published over thirty books covering a variety of issues.

Of particular interest is the manner in which the author organizes his pictures, by type of armor rather than date or location. This book provided my only in-depth view of some of the early tanks of the 1940-45 period. I had almost no knowledge of the Hotchkiss or Renault tanks and only a passing knowledge of the Char tanks nor the many variants of the Churchill tanks.

I was surprised to see my first photo of Michael Wittman’s Tiger tank after it was destroyed outside Villers-Bocage on June 13, 1944. This photo provided several photo details I had not seen previously and hope to include in a future model of Wittman’s tank. I have attempted to provide a number of scanned images from this book to provide a better understanding of its terrific photo collection. Many of the included images could be the basis for and number of dioramas, with partially burnt-out tank hulls, completely destroyed tanks, or tanks laying on their backs.

This book is strongly recommended, primarily for its many very interesting photographs. I would like to thank the Pen & Sword Military Books Ltd., and Casemate Publishers and IPMS-USA for the opportunity to both read and review this work.