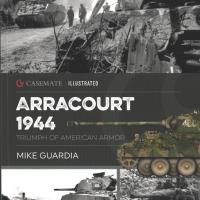 Casemate publishing, a prolific publisher of military history titles, has begun releasing a line of books that focus on huge array of subjects from a single battle, campaigns, hardware, and military units. They are paperback and richly illustrated with contemporary photographs, color profiles, and maps. For many of you, this format may be familiar to other publications that dissect a well-known battle, examining the opponents, armies, weapons, plans, etc. For this series, the publisher has chosen to organize the material as follows:

As the table of contents indicates, the book begins by setting the scene with the Allied invasion of Europe to the early fall of 1944. The narrative then shifts to a brief description of equipment and the units that they served. In this case, the American Fourth Armored Division and the German’s First Army and Fifth Panzer Army. There are a set of color profiles as well as a nice selection of contemporary black and white photographs. While the information is not new, it provides a nice context for the story that they are telling.

The story of the battle is told first by setting the stage of the story with the strategic situation in the aftermath of the successful breakout from the Normandy Bridgehead in July, 1944 and the subsequent pursuit of German Forces across central and northwestern and France to the border region. The focus is not so much on the campaign but the capabilities of the two armies. In brief, the battle was the result of an attempted German counteroffensive to stop the Fourth Armored Division, part of Patton’s Third Army’s attempt to continue their advance to the German border. As many of you may recall, the Allies, under the guidance of General Eisenhower, the Allies had taken the approach of a broad front rather than a narrow advance. Patton, thinking he could pierce the German border. Unfortunately, with the rapid advance across France, the Americans were low on fuel, slowing their advance and frustrating Patton, as the Americans approached the border between France and Germany.

In terms of page count, the setting up the battle takes more space than speaking to what occurred. Broadly speaking, the Germans were preparing to strike against the advance of the 4th Armor Division over the course of a week at the end of September, 1944. The 4th armored was part of a larger attack when the Germans struck. Given how spread out the 4th Armored was, there dispositions were equivalent of a thin defensive crust. Various elements of the 111th Panzer Brigade fought against elements of the 4th. The Americans also were able to take advantage of their overwhelming air superiority to blunt some of the attacks. Nevertheless, the Americans prevailed. Given the number of American vehicles lost, 41 Shermans and a few Stuarts, the Germans perception was that they had stopped Patton’s advance. Despite the American losses, they stood up against German Panzers and, as it happens, was the largest tank battle fought between the US Army and the Wehrmacht. It indicates that, despite the losses, the American Army had come of age. Quite often American success if portrayed as overwhelming, even smothering, the Germans with their boundless resources. In fact, Aaracourt indicates that Americans had mastered operational arts and could meet the Germans on equal terms.

Prior to receiving this book I was broadly aware of the race to the German border and Patton’s issues with logistics. I was not familiar with the battle of Arracourt and this slim volume rectified that. While at times, some of the material seemed to be filler, there is enough context provided to understand the place of the battle in the history of the campaign. It certainly provides proof of Patton’s aggressiveness and the professionalism of the American Army. For modelers and history buffs, this is a welcome addition to anyone’s library.