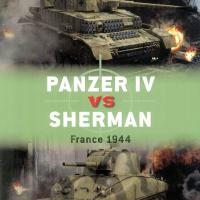 Osprey describes this newest Duel series book this way: “As the Allies attempted to break out of Normandy, it quickly became apparent that there would be no easy victory over the Germans, and that every scrap of territory on the way to Berlin would have to be earned through hard fighting. This study concentrates on, the ferocious battles between the German Panzer IV and US Sherman that were at the heart of this decisive phase of World War II. The two types were among the most-produced tanks in US and German service and were old enemies, having clashed repeatedly in the Mediterranean theater. Throughout their long service careers, both had seen a succession of technical developments and modifications, as well as an evolution in their intended roles - but both remained at the forefront of the fighting on the Western Front. Written by an expert on tank warfare, this book invites the reader into the cramped confines of these armored workhorses, employing vivid technical illustrations alongside archive and contemporary photography to depict the conditions for the crewmen within."

I was really excited to be able to review this book by Steven Zaloga. He is one of the few authors who have greatly researched the M4 tank for his very good books “Armored Thunderbolts: The US Army Sherman in World War II” and “Armored Victory 1945”. When I saw that he wrote this book, I knew it would not be full of myths about the M4. Mr. Zaloga is also a very good modeler. I have his “Modeling US Armor of World War 2” and refer back to it often since I am building Dragon’s M4 Direct Vision #6579 currently. This book will come in handy with the great color artwork of the M4 in it.

I have never read an Osprey Duel series and I truly enjoyed this book. I will be getting more of these in the future. I like how this book started off with a Chronology of each tank and explains how they were developed over many years and many variants. Then it moves on to how these two tanks were used in combat units before Operation cobra in July 1944. The book centers on the M4 and M4A1 that the US Army used during the D-Day operations. They are basically the same tank, but the M4 has a welded hull and the M4A1 is cast, 90-95% of their parts are the same. On the German side is the Panzer IV, Ausf H, what was the main variant used by the three German armor divisions facing the Americans during Operation Cobra.

The second half of the book is all about Operation Cobra – the US Army’s attempt to breakout of the bocage (hedgerow) country of Normandy and into the more open plains of North, central France. The US 2nd and 3rd Armored Divisions are highlighted along with the German Panzer Lehr Division. One interesting point the author brings up not looking at e division’s overall manpower numbers, but at the combat strength of a division. Panzer Lehr had 13,157 soldiers in the division, but only 7,120 actually fought. So a loss of 3,500 men would be just 20% of the overall division, but would represent 50% of the combat strength. I have never thought about that before.

This book has some great reference photos and illustrations of these two tanks. Nice, cutaway artwork of the turrets and interior will greatly add modelers in detailing. Also, there are some good pictures of the exteriors with stowage and many different kinds of hedgerow cutters on the M4s.

I would like to thank Osprey and IPMS for the opportunity to read and review this high detailed book.