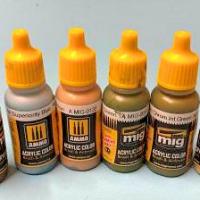 FIRST THINGS: THANK YOU to Mig Jimenez and his team for supporting IPMS USA and the reviewer Corps. We collectively advance when we work with Manufacturers who have the dual goal of (1) customer satisfaction and (2) having a great product. Read more anon…

OK I have to confess, I have used some MIG products in the past, and was impressed (Metallics), but had not used “standard” coatings from Mig. Reason? I have too many bottles of paint, and every new manufacturer has to make a living.

“With this set, you will be able to paint the complex schemes used by the former Soviet Union consisting of 4 to 5 different colors, a solution saving precious modelling time.

These exact colours have been slightly lightened to compensate for the 'scale effect' which allows you to apply the correct colour to your models. Formulated for maximum performance with both brush and airbrush. This set contains four acrylic colours in 17 ml jars. Shake well before each use. Each jar includes a stainless-steel ball agitator to facilitate mixture. Water soluble, odourless, and non-toxic. For the best results, use A.MIG-2000 Acrylic Thinner for correct thinning. Dries completely in 24 hours.”

Up front, the performance MIG AMMO of paint is astounding (BTW there were SIX colors in this set, not four. Minor detail… ). I am an old modeler, and the conversion to acrylics has been slow but purposeful from the much-maligned lacquer and enamel lines (which usually did not scuff off the model the second you touched it with a Kleenex). That means I usually primer and prep my models so the acrylic paint will have a tough surface to stick “to”. And that means (1) no cheating when it comes to spraying lacquer over everything before the final paint job. Lotta reasons, and environmental concern has driven us to working with acrylics. Yeah, it’s better for your lungs, too…..

Enter MIG. I received the Soviet Cold war set because I am going through my period of building all my Soviet aircraft, and this was a great starting point. Containing six different accurate colors, the set provided what I needed. I purposefully decided to NOT primer the model before painting, first to test the paint performance, and second to see just how much I could get away with. On my next model, well, I’ll use a bit more restraint, but this was a test for the masses (many who don’t understand why you have to primer plastic for acrylic). My experience is due to pain and stupidity, until I also learned, so I’m a great example of “do what the manufacturer say”.

Compressor on, paint loaded, and “psssst”.

I was VERY Surprised. This Trumpeter Mig 23 “paint crash test dummy” required a lot of resin bits to bring it up to speed. And the MIG AMMO paint not only adhered to the plastic, but also the putty and the resin. I only did a bit of sanding around the few putty areas, and the MJ Paint performed flawlessly. I usually require at least three coats before I’m happy, and this stuff dried and covered exceedingly well.

I also did NOT mask anything except the windscreen. I wanted to see how well the paint could be worked into crevices and 90 degree areas like control surface attachment points, etc.. SUPERB performance! I only had a bit of touchup to perform without adding overspray

I did not go out of my way to remove the paint with masking tape, etc, right after painting, but basically just retained my “no gloves, no facemask” personality in applying the paint and doing something FUN. And 12 hrs later, the model paint is hard and easily handled.

MIG AMMO paint proved itself up to the task. I did not try to brush paint it, nor did I use weird thinners. (no ammonia). Out of the bottle spray ready; there is a brass ball enclosed with the paint dropper for proper mixing of pigment and thinner, and after about one minute of rattling I unceremoniously dumped the paint in the cup and commenced work on my cheap, knock off double-action paint application tool. (I save my H&S for other projects).

End of the day: I have a Mig Painted by Mig AMMO Paint. And it’s working fine; I’ll slightly polish the surface to see how decals adhere, but all indications point to a successful new, favorite paint. Thanks again MIG Jimenez and crew for a fantastic product submission; you now have a new regular customer!