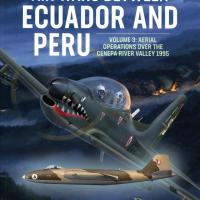 “Air Wars between Ecuador and Peru” is volume 3, Operations over the Cenepa river valley 1995 is the final book in the three part air war series between these two countries. The author who is from Peru goes through great detail from both sides with a strong emphasis from the Peruvian perspective which is understandable. The book is 80 pages of print and eight pages dedicated of colorful aircraft art, photos and a map. There is a list of abbreviations included at the beginning of the book.

Being a last issue in the three part series, history covered in the previous volumes are discussed is some detail but tend to provide background to the last conflict in one concise volume. The beginning of the book discusses early conflicts and lessons learned with a need to modernize both countries air assets. A brief discussion on how the countries shared border has been disputed on where to draw the borders and how each country would encroach onto each territory. This dispute is the basis of the armed conflicts.

Volume 3 covers all the aircraft that was acquired on both sides and the desire for modern equipment. It is interesting to see such a large variety of aircraft that Peru and Ecuador obtained over a short period and a vast array of nationalities the aircraft came from. Aircraft ranged from the US Cessna 150 to the Russian MI-25 Hind (export version of MI-24) helicopter. The reference photos are quite numerous from the Peruvian perspective with color photographs, aircraft serial numbers and charts on operational vs aircraft in maintenance.

The author breaks down the conflict to daily reports for the nearly month long conflict. Each day the author covers notable events and aircraft (usually including serial number) that happened. The final section covers post conflict with peace and future modernization of the air forces.

This book is a great chronology of a lesser known conflict with excellent reference for historians and modelers. The color aircraft art is impressive and the color photos along with aircraft is maintenance is extremely helpful to the modeler. What amazed me is how many nationalities provided aircraft to Peru and Ecuador.

I would like to thank Casemates and IPMS/USA for this book to review.