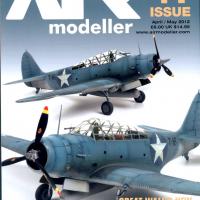 As previous reviews have indicated, this bimonthly magazine continues to achieve its claim of “Showcasing the very best in scale aircraft modeling.” Actually, I think it might better be said that each issue “showcases the very best photography of scale aircraft models.” Whatever the claim, this publication provides eye candy for those in the hobby who can afford the price of admission. At $14.95 a copy, it should be a cut above the rest of the crowd…and, by most measures, it is. The photography is nothing short of spectacular, the layout is professionally handled, and, in contrast to previous issues, #41 is printed on a slightly thinner, glossy paper that greatly enhances the sharpness of the 185 photos used to illustrate the six model building features (and the remainder of photos that illustrate the product reviews). In common with previous issues, #41 offers a variety of subjects that should satisfy the tastes of many model builders. In this issue, articles cover building:

The builds are well presented in photos and text. The finished models are truly worth documenting in the high quality photo essays that are included in Air Modeller #41. The only issue I have with the TBD-1 Devastator build is that Mark Neville goes a bit overboard on the weathering of an aircraft that went to war one time in a heroic but ill-fated effort to sink the Japanese fleet at Midway. Color photos from the film taken on that mission verify that aircraft T-16 of VT-8 was not all that chipped and stained before departing the Hornet for its mission. It’s a small nit to pick, but one that detracts from the otherwise well-built model. The other builds are true masterpieces.

The new product reviews that round out this issue are timely and written in a clear, concise manner. If you are familiar with this publication, you know what to expect. If you are not familiar with it, you may want to be. And finally, if these subjects interest you, you will want to seek out and purchase Air Modeller #41 before the supply runs out. It is recommended.

My thanks go to AFV Modeller LTD and IPMS/USA for the opportunity to review this issue of Air Modeller.