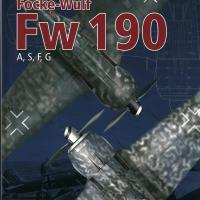 Kagero has released books of various aircraft in the past. This is their 12th edition of the Mongraph Specials and focuses on the FW-190 short nosed variants. The beautifully hard bound book has over 250 pages of high quality paper. It has all the hallmarks of Kagero’s other books.

There are plenty of clear, large pictures throughout the book. There are also some exquisite color profiles that are an inspiration to any would be modeler or historian. On top of that there are some first rate line drawings in the book as well as separate 1/48 and 1/32nd scale fold out drawings for the FW-190A5 and A-8 that are absolutely gorgeous. There are 1/72nd scale drawings included in the book. Now that all sounds great, so lets see if the contents match the highlights.

We start off with the production and history of the type. Some really good photos of the prototypes are included. Every variant is covered well from the A-0 to the last one. Some great crystal clear detail shots are included of the early variants. Every variant is discussed and each unique change is discussed and often illustrated. The A series is discussed, then the F which was built off of the Anton, and then the G, which was the dedicated long range ground attack variant. The final version discussed is the Fw-190S, or trainer version.

Following the discussion on the variants, painting and markings are discussed and shown. This includes a section on exterior and interior colors. Some photos of the various unique markings are included. One that I’ve always loved is the ‘jawed’ A-2 used by JG-1 for pilot training. It is a simple mouth that even makes the FW-190 seem toy-like. There are some other unique and peculiar markings shown, some which defy regulations.

Operations in Western Europe are the next chapter. Here is where the combat career of the fighter is discussed, from its initial surprise to the Brits over the channel to the end of the war. Units shown in photos here are JG1, JG2, JG11 and JG26. North Africa is the next theater discussed. One aircraft that stood out to me here is the A-5 of Major Herman Graf. There are other aircraft of the unit shown as well. No discussion would be complete without the Ostfront. Again there are plenty of great photos in this section.

The end of the war produced some great color schemes and they are shown in photos.

This portion of the book is rounded out with nine pages of some gorgeous color profiles. There is plenty of inspiration for the modeler here.

That is just the first 100 pages, not even halfway through the book. Truly a great reference piece, but let’s see what’s left.

Then there are some production shots and up-close detail shots that will prove invaluable to modelers, especially the landing gear area. Then we start getting more operational aircraft and this is where the book becomes even more valuable. All the armament options are shown, as well as, markings from all fronts. You’d be hard pressed not to find inspiration in here. Somehow a few pics of some D-9s slipped into this section as well.

More engine detail photos that will be extremely helpful for a modeler doing up an exposed engine are another highlight. One interesting pic that I didn’t know about was that the engine cowling on the A-0 was completely different shape at the front to the production machines. Some details photos from the Fw-190S are interesting and will prove useful to the modeler. I’ve never noticed the grab handle on the cockpit sill before.

The rest of the book is a potpourri of excellent period shots and text that highlight the various fronts. This includes Wilde Sau operations, as well as, fighter bomber and photo recon aircraft. The Mistel and torpedo projects are also highlighted.

An appendix with all the serial numbers is included which will prove helpful to the historian.

Following that are drawings out of the Luftwaffe pilot and mechanic manuals. This is really helpful in understanding the aircraft.

Now a section for a modeler, are complete 1/48th scale line drawings off all the variants from the A-1 to the A-9. F-3 to F-8 aren’t forgotten either. Every weapons system is shown installed. These drawings will definitely be a boon to the modeler. 1/72nd scale drawings are included as well. What is nice about these is that it highlights the differences between each variant as well as the accurate drawings. The FW-190S is also shown in 1/48th scale.

Some absolutely beautiful full color profiles are the final chapter of this book. These are some gorgeous renderings that will be extremely motivational.

Overall this is an excellent one place source of information on the aircraft, its pilots, and its operational deployment. The drawings and color profiles will prove invaluable to the modeler. It is hard to find any disparaging comments on the book. I loved if from the beginning to the end. It is not just a rehash of old photos, there are plenty of new material in there to keep most happy. Again, I loved the book.

Thanks to Casemate and IPMS/USA for the review copy. You can obtain your copy by contacting them at https://www.casematepublishers.com/ or your connected book dealer.