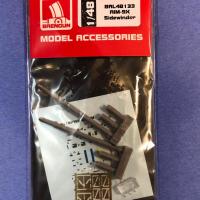 For one of their latest releases, Brengun has issued a pair of AIM-9X Sidewinder missiles in 1/48 scale for arming your latest modern aircraft in this scale. This is a relatively easy upgrade for modelers that have some experience with resin and photoetched parts. Assembly is straightforward, which adds to the ease of using these replacement missiles.

The AIM-9X is the latest development of the venerable Sidewinder missile, and manufactured by Raytheon, it is currently in use by the U.S. Air Force, U.S. Navy, and more than two dozen NATO countries and U.S. allies. The missile uses infra-red tracking and actually maintains the rocket motor, warhead, and fuse of the predecessor AIM-9M. The big change with the X is the use of thrust vectoring to allow the missile to quickly change direction during flight. The AIM-9X was first tested in 1999 and was in full operation in 2004.

Upon opening the packaging for this release, you will find one pair each of the missile bodies, training and active motor sections, and pre-flight nose covers all cast in a medium gray resin. Also included are three clear IR heads, a small photoetch fret containing the missile fins, and a decal sheet.

Construction consists of adding the motor section of choice to the body followed by the fins. I left the IR heads off until after painting and decaling was completed. The nose covers are well designed in that they can be added after the construction and painting are complete for those having a last-minute change of plans with their build.

I built my missiles using CA glue to attach the motor to the body as well as attaching the fins. After priming the missiles in Stynylrez White, I painted them with Model Master Acryl Light Ghost Gray (FS 36375). At this point I used AK True Metal Gun Metal for the dark metal areas and Steel for the light metal areas as well as Ammo by Mig Brass. I brushed Alclad Aqua Gloss over the gray paint before adding the 20 decals on each missile with Micro Set and Micro Sol. I finished by airbrushing AK Ultra Matte Varnish over the entire missile and then used G-S Hypo Cement to install the IR heads.

My hits for this missile set are the nice castings of all the parts as even the motors are properly recessed to show additional detail. The photoetched parts look good as well, and the clear IR heads are not always provided with missiles, so this was appreciated. As mentioned, the protective covers can be added even after painting and decaling are complete which is great as I have seen other releases which require the nose to be trimmed for replacing the head with a cover.

I have no real misses for this release. I am not a big fan of adding flat photoetch fins to missiles, but Brengun has cast the bases in the body, which makes setting the angles much easier. The brown and yellow stripe decals look a little light to me, but again, this is not a big deal.

In conclusion, I would highly recommend this missile set for folks who are looking to add some great looking AIM-9X Sidewinders to their next project.

My thanks go out to the folks at Brengun for supplying this item to the IPMS-USA for review, to Phil Peterson for allowing me to perform this assessment, and to you for taking the time to read my comments.