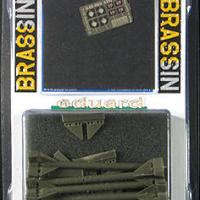 For most modelers, we all will spend lots of time and energy detailing the aircraft to the max, yet when we get to the ordnance, we are left wanting by the kit-supplied items. Eduard comes to the rescue within their Brassin line and provides a great set of Sparrows for your latest detailed build. Designed and molded with the latest technology, they will satisfy the need for detail.

The AIM-7 Sparrow family was birthed out of a late 1940’s project to develop an aerial beam-riding rocket out of the HVAR used during WWII. Douglas quickly discovered the size of the HVAR was inadequate for the needed electronics, so the body was enlarged. The result was the AAM-2 Sparrow I, which made its first “interception” in 1952, and was carried onboard Skyknights and later F3H-2M Demons and F7U Cutlasses. It use was limited, but it did pave the way for further development.

The Sparrow II, or XAAM-N-2a, later the AAM-N-3, was an attempt to develop a fully active radar-homing system. It was developed in conjunction with the F5D Skylancer and Canadian Avro Arrow supersonic interceptors. Reliability was questionable, and the project was canceled as the respective aircraft it was to arm were also shelved.

The modern Sparrow stems from the AAM-N-6 Sparrow III, which is a semi-active system that tracks based on reflected radar from either ground or airborne control, such as the launch aircraft. This system is far easier to fit within the confines of the rocket body. Raytheon had started development of the semi-active system concurrently with the Sparrow I; it was in US Naval inventory by 1958 and had a production of 7500 rounds. The missile was also selected for the infamous F-110, which later became the F-4 Phantom II. Additional improvements, such as a new solid rocket motor, gave the Sparrow III a 22 mile range. By then, new designations were developed, with the Sparrow I and II becoming the AIM-7A and AIM-7B, and the Sparrow III with its subsequent improvements became the AIM-7C, D, and E, respectively. Over 25,000 AIM-7E’s were made.

Vietnam saw the first combat use of the AIM-7E in widespread use. Unfortunately, a combination of several factors led to the missile having less than favorable results, with only a 10% kill ratio. Some of this can be attributed to the same lack of ACM pilot training that affected all engagement kill ratios, but also the tropical environment and both mechanical and electronic issues arose. The worst of these issues was a premature detonation of the warhead, leaving the enemy aircraft unscathed. An improved version of the -7E, dubbed the “dogfight Sparrow,” was developed with clipped fins and was optimized for closer ranges; however, it only improved the kill percentage slightly. Regardless of its shortcomings, the Sparrow’s first combat kill came on 7 June 1965 when USN F-4B Phantoms shot down two MiG-17’s.

An attempt to rectify some of the shortcomings of the Sparrow led to the development of the AIM-7F, which became available in 1976. It had a new dual-stage rocket motor, solid-state electronics, and a more powerful warhead. The introduction of the F led to further improvements in overseas-licensed versions such as the BAe Skyflash in Great Britain and the Italian Alenia Aspide.

The AIM-7M entered service in 1982 and featured several of the improvements found on the Skyflash, such as the new inverse monopulse seeker, and a few other improvements including an active radar fuse, digital controls, improved ECM resistance, and better low-altitude performance. Its baptism of fire came in Desert Storm with a 40% kill probability. Additional improvements brought about the AIM-7P, which is externally the same as the AIM-7M. M’s are in the process of being upgraded, but for the most part are simply replaced by P’s as the inventory of M’s dwindles. Also, the Sparrow, with its nearly 60-year history, is being replaced by the AIM-120 AMRAAM.

As a modeling note, this set can represent both the AIM-7M and AIM-7P. The E and F differ externally by having one less pair of target detector devices, or TDD, on the forward body which are offset from the fins, while the AIM-7M/P has four TDD’s total which are inline with the fins. These TDD’s are the narrow rectangular indented areas on the missile body on the Eduard parts. Eduard also makes an AIM-7E/F set for those needing the earlier missiles.

The parts come in a blister pack similar to Aires sets, with the resin parts sandwiched in the larger compartment with some foam rubber, and the photo etch separated and backed with paper. You get four missiles total in the set, with a small photo etched fret containing caps for the rocket motor end and some color parts to add along the body side. The rear fins are molded as part of the body, with each forward fin molded separately. Casting is blemish-free, and the detail is very crisp. With my sample, all the rocket bodies were straight with no warping, and all the fins, though molded very thin, were free from any breakage.

I started by removing the casting block from the missile body. This was done by gently cutting behind each fin with a razor saw, then using the saw to cut the casting block from the rear of the body. A few swipes with a file and they were ready. Forward fins were removed with a sharp X-acto, and cleaned up with a file. A small peg is molded as part of the fin, so this was trimmed down to fit in the corresponding holes in the missile body. They fit quite well – just take extra care to be sure they are square and lined up properly. A small etched part is added to the end of the body to replicate the rocket motor; however, I feel this is a bit shallow and many may opt to hollow out the end with a drill bit.

When comparing the Brassin Sparrows to a couple of kit supplied AIM-7s, the difference is quite stark. The resin items have far more detail, plus the separate forward fins add quite a bit of noticeable definition. While most kit parts have very little in surface detail (sometimes none at all), the Eduard Brassin parts have fuse windows, electrical conduit, electrical sockets, and various other details molded crisply. It is so well detailed that there is an “up” or pylon side of the missile, so be sure to mount it correctly with the conduit on the right. Consult your references for the aircraft you are hanging it on, as it tends to mount slightly different depending on the pylon type. Also, if you are planning on mounting it on an F-14, F-15, or F-4, leave one fin off as these mount within the airframe or pylon.

I have become a huge fan of the ordnance produced by Brassin and similar product lines. The Brassin Sparrows are very well priced, being right at $10.00, and really are far better than anything in plastic. I am looking forward to mounting these on my next modern fighter jet build, as they will go a long way to complement the detailing and work done with the rest of the model, adding that last touch.

Thanks to IPMS USA for the chance to review these and Eduard for supplying the sample!